In the almost two decades that chef Francois Mermilliod has been in Singapore, I have not had one disappointing meal cooked by him. And I've tasted his cooking many times.

The Frenchman came to Singapore in the 1990s as sous chef of the now-defunct Salut restaurant, then became the head chef at Au Petit Salut, Duo, Flutes on the Fort and his last stop, Absinthe, where he spent the past six years. Two weeks ago, he opened his own restaurant, Bar-A-Thym, in Gemmill Lane, with partners that include The Prive Group. It takes over the space vacated by Wolf, a nose-to-tail restaurant owned by The Prive Group that closed down recently.

Mermilliod has been consistently good. His French cooking is contemporary, but he never tries to be trendy or gimmicky. It is no different at Bar-A-Thym. 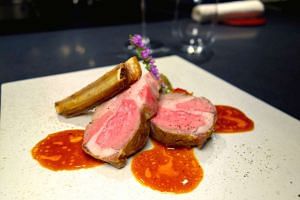 Bar-A-Thym is a play on the French word "baratin" - which means sweet talk - and focuses on cooking on a plancha, a flat-top grill that looks and works like a teppanyaki grill.

Most of the seafood go on it, as do a lot of the meat. The chef then finishes the dish by adding the other components and sauces.

For me and, I'm sure, many diners, a good dish is measured by how I can't wait to eat it again. In the case of Bar-A-Thym, that applied to almost every dish I tasted at a dinner last week.

There were only three exceptions and two were because of personal biases. I find sardines - unless they're canned - too fishy, so I passed on the Marinated Sardines, Bell Peppers, Olive Oil that were served as an amuse bouche. But if you are not bothered by fishiness, the dish is available on the a la carte menu for $18.

The other amuse bouche, Mackerel Rillettes, Fennel, Sundried Tomatoes (available on the menu for $14), was not fishy, but lacked any distinctive character and thus made little impression.

The Bresse chicken from France tasted good, but it was all breast meat, a cut that I dislike. And even though it was tender, flavourful and moist, the monotony of its texture and flavour meant that I got bored with it quickly. So, good though it was, I would not order it again.

That, however, is certainly not the case with the other dishes.

A starter of Mediterranean Sotong, Homemade Chorizo, Fregola Sarda ($22) was a play on textures among the chewy squid, the soft beads of fregola pasta and the firm slices of chorizo sausage. The chorizo also added a nice touch of spice to the grilled squid.

The only fault I could find was that the squid was not hot - probably because it was cooked earlier on the plancha and left to sit while the rest of the dish was being cooked. But it was something that could be easily fixed by timing the process better.

The other starter I tried, Iberico Pork Jowl, Pea Tendrils, Pear Chutney ($22), was even better. The slightly charred strips of meat were bursting with fat and juices and the pork's crisp texture made it a double delight.

From the entrees, my favourite was the Alaskan King Crab, Angel Hair, Uni, Espelette ($32). The crab leg was plump and sweet and the juices were soaked into the pasta. Espelette, a French chilli pepper, was lightly applied and so did its job of spicing up the flavours without being overly assertive. Pearls of ikura (salmon roe) added another dimension of flavours as well as some colour. The sea urchin was a bit lost among all these, though.

The Deterini Tomato Tart Tatin, Rocket Herb Salad, Burratina, Fresh Almond ($22) was a delicious way to introduce vegetables into the meal. The tomatoes were tart and sweet at the same time, perfect for balancing the bitterness in the rocket leaves and the milkiness of the burratina cheese.

The crisp, buttery puff pastry at the base made everything more exciting on the palate than a plain tomato salad would.

Besides the chicken, I also ordered the Wagyu Beef Sirloin, Fresh Girolles, Epoisse Gratin ($48) for my mains. The beef was cooked medium-rare as I requested - pink in the middle, but firm at the edges - with variations in texture and flavour.

It was good on its own, but of course I would not complain about the lovely girolles (chanterelle mushrooms). Or the gratinated potatoes that were soaked in cream and had a delicious epoisse cheese crust. It was sinfully rich, though, and not something you should finish if you want dessert.

I had room for just one, the White Peach, Aged Balsamico, Soft Rousquilles ($15). It was a simple composition of the various ingredients, but the flavours came together well. After all that cream and cheese, the freshness of the fruit and the acid from the balsamico were both very much appreciated.

•Life paid for its meals at the eateries reviewed here.