Picking and eating plants growing in the wild may seem primitive to city dwellers in Singapore, but that is slowly changing, thanks to a global food trend that is catching on here.

This story was first published in The Straits Times on Feb 28, 2015. A version of this was published in the June 2015 issue of The Life digital magazine.

He crawls on all fours on a pavement in Dempsey Hill, fingers combing through blades of grass and eyes darting back and forth.

Mr Bjorn Low then gingerly picks up tiny leaves, pops them into his mouth and chews on them. “That’s wood sorrel,” says the co-founder of urban farming consultancy Edible Gardens.

“Some might think they are weed, but they are actually edible. And we want people to become more aware of things growing around us,” says the 34-year-old.

Picking and eating plants growing in the wild may seem primitive to city dwellers in Singapore, but that is slowly changing, thanks to a global food trend that is catching on here.

While there are no official figures of the number of people who forage for food in Singapore, Mr Low says that more chefs here have expressed interest and have approached Edible Gardens, which occasionally hosts guided foraging trips for chefs.

European restaurants, for some years now, have been plating food prepared with ingredients foraged from the wild, a practice glamorised and made popular by Rene Redzepi of the two-Michelin-star Danish restaurant, Noma.

But foraging in urbanised and land-scarce Singapore is not without its caveats.

Mr Low cautions against foraging in nature reserves or on land tended by the National Parks Board as it is illegal to do so.

He also cautions against picking plants by roads with heavy traffic as they might be tainted.

“There are definitely poisonous plants around, so be careful of what you pick and, if you are unsure, do not pick them at all,” he adds.

But this return to our hunter-gatherer roots does not have to be limited to the local greenery.

Mussels, clams and even oysters can be found growing wild on the shores of Singapore.

And all that is needed to harvest these molluscs are a pail and some elbow grease. 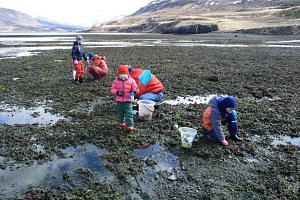 Foraging in Iceland: The Hunger Games 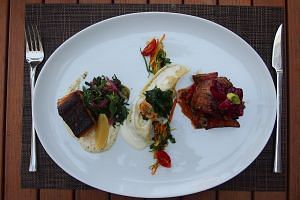 Cape Town offers much produce to be picked by visitors, as well as good seafood and wine

Mr Nigel Lian, a marketing communications executive and fishing blogger, digs for mud mussels once a month on the mudflats of Kranji Beach during low tide. On good days, his haul of the delectable shellfish can weigh up to 2kg.

“The very first reaction I get from people is, ‘Can eat one or not? Why don’t you just buy them,’” says the 26-year-old.

“But I usually explain that by digging for clams, you are really working for your food and that gives you a sense of satisfaction.”

Mr Lian adds that older folk tend to take better to foraging as it was something they already did in kampungs.

Foraging is an activity man has been doing for a long time, Mr Low points out. “Medicine men forage for herbs in the mountains, tribes forage for food, established societies in Europe have a thriving foraging of mushrooms during autumn. It has always been a part of human history.”