61-year-old American hanged himself in hotel room in France, where he was working on show

American celebrity chef and television host Anthony Bourdain was found dead in a hotel room in Strasbourg, France, yesterday. The 61-year-old had hanged himself.

The face of CNN's food and travel television series Parts Unknown, as well as the Emmy Award-winning No Reservations show on the Travel Channel, the street-food advocate was a strong supporter of Singapore hawker fare.

He coined the term "hipster hawker" at the inaugural World Street Food Congress, which was held in Singapore in 2013.

Addressing the culture of street food and why it matters at the congress, he used "hipster hawker" to describe the rise of a new generation of "innovative young chefs, people for whom street food is a real opportunity to establish an identity, a business, a presence as a brand".

It is the second high-profile suicide of a US celebrity this week. Fashion designer Kate Spade hanged herself in an apparent suicide in Manhattan on Tuesday.

Mr Bourdain, who used to be the executive chef at the now-defunct Brasserie Les Halles in New York, was in France working on an upcoming episode of Parts Unknown.

THIS song from the score from tonight’s HONG KONG @PartsUnknownCNN is gonna stay with me https://t.co/GgaSAndyXs

Beside his TV shows, he had been working on opening Bourdain Market, a 155,000 sq ft, Singapore-style hawker centre and retail food market at New York's Pier 57.

Although he pulled the plug on it last year, he did not rule out opening the market at another New York location. He reportedly wanted to showcase food, such as Singapore Hainanese chicken rice, at the market.

Mr K.F. Seetoh, 55, founder of food consultancy and street food guide Makansutra, which organises the World Street Food Congress, was shocked to hear of his death.

Mr Seetoh, who first met Mr Bourdain in Singapore in 2001 when he was in town to film an episode of the Food Network's A Cook's Tour, the celebrity's first TV series, took him to dine at Sin Huat Eating House in Geylang.

The two men, both equally passionate about street food, hit it off and would often reminisce about their first meal together, Mr Seetoh said.

"I haven't fully digested the news yet. Tony and I would talk, throw up ideas, share thoughts about the future. He told me he had wanted to spend more time on Bourdain Market and bring the hawkers from all over the world that he had met under one roof. It was a novel retirement plan, and he was so passionate about it," he added.

Mr Seetoh was in New York last month to sniff out potential opportunities and meet investors in a bid to help Mr Bourdain reignite the international food market project.

Mr Bourdain was propelled into international stardom after his 1999 New Yorker article, Don't Eat Before Reading This, which sparked in 2000 his bestselling book Kitchen Confidential: Adventures In The Culinary Underbelly. 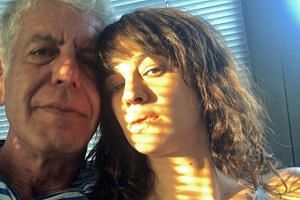 One of them was Mr Wayne Liew, chef and third-generation owner of Keng Eng Kee Seafood, a zi char restaurant in Alexandra Village, who cooked for Mr Bourdain in his family's home in Queenstown in April last year.

The 34-year-old said that Mr Bourdain's name had come up in conversation with his family a few days ago.

He and his family had served Mr Bourdain claypot pig trotters, among other home-cooked dishes. At dinner, they had discussed the possibility of being part of Bourdain Market.

"I never thought I would meet him, let alone cook for him in my own home - it was a dream come true. I am deeply saddened by the news," Mr Liew added.

Mr Ng said: "He made me realise that to keep hawker food going, we have to evolve, and only if we evolve will we be able to bring hawker food to the rest of the world. His book is the only book that I have read cover to cover. It gave me goosebumps."