Singapore's fine-dining scene has been dealt another blow, with the impending closure of its only three-Michelin-starred restaurant Joel Robuchon Restaurant at Resorts World Sentosa (RWS) by the end of this month.

This comes just four months after the exit of chef-owner Andre Chiang of the two-Michelin-starred Restaurant Andre. He closed his Bukit Pasoh restaurant after eight years to return to Taiwan.

Joel Robuchon Restaurant's sister outlet at RWS, the two-Michelin-starred L'Atelier de Joel Robuchon, will also close, although it may re-open in Orchard Road, according to a report by The Business Times.

RWS confirmed the closures yesterday, but declined to elaborate. It said it would release a joint statement with Robuchon's restaurant group soon. Both restaurants - opened in 2011 - will serve their last meals on June 30, just shy of the unveiling of this year's Singapore Michelin Guideon July 25 .

In a 2016 interview with The Straits Times, Mr Robuchon, 73, spoke about the "need to be perfect" to achieve and maintain three coveted Michelin stars. He said fine dining would remain relevant, but the shift to casual dining would persist.

On the dining scene here, Mr Desmond Sim, 43, head of research for Singapore and South-east Asia at real estate agency CBRE who specialises in retail and food outlets, said: "It is survival of the fittest, so brands will come and go. Now, RWS will have to curate another chef to take over the space, and maybe that could surprise the world." 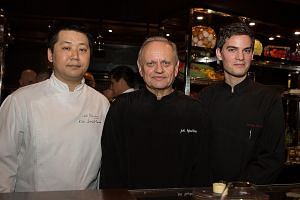 The dining scene here got a boost in 2010 when integrated resorts RWS and Marina Bay Sands opened, both boasting celebrity-chef restaurants. There are now 38 eateries with Michelin stars here. Big names are expected to open this year, such as Marco Pierre White's The English House in Mohamed Sultan Road and Alain Ducasse at Raffles Hotel.

The dining scene here got a boost in 2010 when integrated resorts RWS and Marina Bay Sands opened, both boasting celebrity-chef restaurants. There are now 38 eateries with Michelin stars here. Big names are expected to open this year, such as Marco Pierre White's The English House in Mohamed Sultan Road, and Alain Ducasse at Raffles Hotel.

Mr Michel Lu, 49, executive chairman of Revolver Asia, which specialises in mergers and acquisitions in the food and beverage industry, said the far-flung location might have been an issue, adding that "Sentosa and RWS have not proven themselves as sustainable locations for fine dining".

Calling it a "very sad day", restaurateur Ignatius Chan of the one-Michelin-starred Iggy's restaurant at Hilton Hotel Singapore said: "You don't exit because you are not doing well, it is because you are in such dire straits that it makes no sense to continue.

"It is sad, but also an opportunity for us to sit up and think of what kind of gastronomic city we want to be. Even casual places need to reinvent, but it is easier for them to change," he said, adding that a major problem is retaining staff. "We can't automate our kind of business - you can't just have a pair of hands; it needs to be well-trained."

Others, such as chef-owner Han Liguang of the one-Michelin-starred Labyrinth at the Esplanade Mall, are more upbeat. The closures, he thinks, will not affect Singapore's restaurant scene.

"We have plenty of passionate chefs here, and it is a competitive industry. We always have new players and exciting restaurants coming up, and that will refresh the industry," said the 32-year-old, adding that rumours that Joel Robuchon Restaurant might close had been swirling in the industry for some time. "But it never did. Then it won three Michelin stars, so I thought they had consolidated their positions in the dining scene."

Mr Nathaniel Chan, 35, who works in finance, has dined at Joel Robuchon Restaurant several times with his wife. "It is very unfortunate that they have to close. It is Mr Robuchon after all, not any random chef closing," he said.