Foodies can experience a more exotic and lesser-known side of Singapore food at this year's Asian Masters, a festival that celebrates Asian culinary talent and products.

The meals feature local seafood from a Singapore kelong, forgotten herbs and fruit such as daun kaduk or wild pepper leaves and the fruit of the binjai tree, Singapore-harvested honey and an underground nasi biryani seller who plied his trade through the help of social media.

There is also a special meal curated by The Straits Times Life editor Tan Hsueh Yun at a private kitchen in Upper East Coast Road that has a three-month waiting list. (See embedded story.)

The sixth edition of the epicurean extravaganza will feature specially curated wine dinners and chef collaboration meals as well as culinary workshops, which will run from Saturday to April 17. 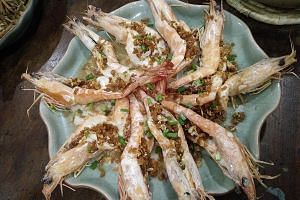 Organised by Sphere Exhibits, a wholly owned subsidiary of Singapore Press Holdings, and food and beverage consultancy Poulose Associates, the festival itself goes on for a year. It includes the Feast Asia dining programme, which offers exclusive discounts at more than 50 restaurants islandwide for HSBC card holders until next February.

Card holders also get 20 per cent off the Gastronomic Treasures dining events, which are priced from $88 a person.

A highlight of Asian Masters is the Best Asian Restaurants awards, which celebrate the best of Asian dining in Singapore. They will be announced at an awards ceremony on April 16.

On the dining front, chef-owner Violet Oon of National Kitchen by Violet Oon at the National Gallery Singapore will present a meal based on rediscovering her roots.

The 68-year-old says: "As diners, we are so much more aware of herbs and vegetables from countries such as France and Italy. I thought it would be nice to introduce what's in our backyard. We have equally exciting things right here in Singapore."

This year, she was reacquainted with the binjai tree, which bears fruit only once every few years. She will serve the fruit - it has a strong aroma and looks like a mango, but has a texture similar to soursop - as a sambal with barramundi for a wine-pairing dinner at her restaurant.

Keen on biryani? Try it in four styles at StraitsKitchen at Grand Hyatt Singapore. The rice dish, prepared by Ahmed Zahid, a former bartender who goes by the Instagram handle @globalmatsoulkitchen and works as a chef at modern Asian restaurant Coriander Leaf at Chijmes, will be served alongside specially created drinks such as a chilli coconut lemongrass elixir.

The 40-year-old self-taught chef, whose biryani recipe is inspired by a Middle Eastern one, cooked and sold the dish on his days off from 2014 until the end of last year, marketing it on social media. He is taking a break as an underground biryani seller, but will serve it again for Asian Masters.

Other highlights include the Dragon Chamber Dinner with Cloudy Bay wines at Lokkee, a progressive Asian restaurant at Plaza Singapura, which will feature dishes such as Firecracker Chicken Nest paired with Cloudy Bay Te Koko wine; and the Rose Champagne dinner put together by four female chefs.

And for the first time, Asian Masters will feature a vegan dinner.

Mr Francis Poulose, 50, event organiser and managing director of Poulose Associates, says: "We are trying to find a better balance this year and offer more premium events that are fun, different and exotic."

• For more information, go to www.asianmasters.com.sg

THE ROSE CHAMPAGNE DINNER
Four female chefs - Petrina Loh of Morsels, Josephine Loke of 665°F steakhouse at Andaz Singapore, group pastry chef Jasmin Chew of Stellar and former group executive chef of 28 Hongkong Street and now-defunct Crackerjack's Alysia Chan - will showcase a menu based on edible flowers. Produce such as Hokkaido scallops and duck breast will take centre stage alongside flowers such as hanaho and oxalis.

The dishes will be paired with rose from champagne houses such as Moet & Chandon, Veuve Clicquot and Ruinart.

TREASURES OF THE NYONYA GARDEN WITH THE WINES OF CAPE MENTELLE
National Kitchen will showcase dishes made with forgotten fruit and vegetables. Tuck into barramundi with sambal buah binjai (a spicy and tangy salad made with the fruit of the binjai tree) and daun kaduk otak otak (otak made with wild pepper leaves). Other highlights include grilled ribeye with green peppercorn and sambal hijau, and kueh for dessert.

A CELEBRATION OF BRIYANI BY #GLOBALMATSOULKITCHEN
Chef Ahmad Zahid, famed for his underground biryani kitchen, will serve four types of biryani with sides and condiments such as jackfruit curry and honey sambal chicken. The dishes will be paired with drinks from mulled plum with roselle to a celery, hibiscus and juniper tonic with cracked pepper.

Celebrate local produce with a five-course menu put together by five chefs including David Pynt of Burnt Ends. Dishes include an egg custard with crabmeat, spinach and mushroom consomme made with Freedom Range Eggs; and beer-can chicken with 2015 Cloudy Bar Pinot Noir.

SHAMBALA - A HOLISTIC VEGAN DINING EXPERIENCE
The vegan dinner will start with canapes, followed by a six-course meal with dishes such as rose of dragon fruit, vegetable garden, orange basil sauce paired with light black tea with turmeric, saffron and cacao nibs; a charcoal tempura platter with sesame sauce paired with Furinbizan junmai sake; and duo of ravioli in a cashew nut basil sauce with truffle espuma paired with Kinunoaji junmai daiginjo sake.