Hup Lee will close on Aug 22; Jalan Besar shophouse sold as co-owner wants to retire due to deteriorating health

Hup Lee, one of the last few old-school coffee shops in Singapore, will close on Aug 22.

The shophouse has been sold and its co-owner Foo Mui Ya, 68, will be retiring.

The coffee shop in Jalan Besar is known for its kaya toast grilled over a charcoal fire, soft-boiled eggs and traditional sock-brewed coffee and tea.

Madam Foo's son, Mr Cheong Mun Loong, 34, told The Straits Times that one reason for closing down is that his mother's health has been deteriorating.

The shophouse, which was co-owned by Madam Foo and her younger brother, whom Mr Cheong did not name, had been sold in mid-May for an undisclosed sum.

Mr Cheong said his uncle had wanted to sell the shophouse for the past few years, but there had been no buyers. 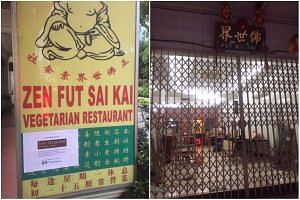 He believes the new owners will use the space for a restaurant.

He added that Hup Lee's business has gone down over the years. The closure of the Sungei Road flea market across the road last month had also affected business badly.

Mr Cheong said his mother needs to take a break badly: "My mother works every day of the year, except for the first two days of Chinese New Year. She may be tough, but she is getting old and needs to take it easy."

Hup Lee has been operating since the 1950s and was started by Mr Cheong's great-grandparents, who owned the shop space.

Auntie's coffee is very good and it's hard to find someone who does it like her. Once, the coffee was a bit bitter, so I didn't finish it. She saw it and asked me immediately what the problem was. From then on, my coffee has always been perfect.

They passed it to Madam Foo and her brother in 1976.

The younger Mr Cheong fondly recalls growing up in Hup Lee and helping to crack the soft-boiled eggs. He now helps out at the coffee shop occasionally.

He said regular customers would insist that his mother is the only person who does the coffee and toast right.

"She would take a teaspoon, scoop some of the coffee and let it trickle to see how thick the coffee is. Based on her judgment, she would add more water if necessary.

"For the toast, she would flip the bread a few times to ensure that it is evenly brown and toasted. She is very particular about consistency."

Fellow hawker Nick Soon, 50, owner of kueh stall One Kueh At A Time at the nearby Berseh Food Centre in Jalan Besar, agreed.

He said: "Auntie's coffee is very good and it's hard to find someone who does it like her. Once, the coffee was a bit bitter, so I didn't finish it. She saw it and asked me immediately what the problem was.

"From then on, my coffee has always been perfect. I like that while she may have been doing this for a long time, she still asks for feedback. It will be hard to find such old-school coffee shops like Hup Lee."

Retired businessman Alfred Lim, 65, said in Mandarin: "I have been coming to Hup Lee for many years with my friends and it's very sad to hear that it will be closing.

"But the owners certainly deserve to take a break, and now I will have to figure out where to go for kopi."