Are Japanese eggs, sold at a premium compared with local ones, all that they are cracked up to be? The Sunday Times finds out in a blind taste test

In recent months, new kinds of egg crates have been stacking up in Singapore. Supermarkets here have been hatching many fresh sources and varietals of eggs.

In October, The Sunday Times reported on Ukraine joining 10 other sources of eggs for Singapore, including Australia, Denmark, Japan and Sweden.

Some premium offerings from Japan come with a hefty price tag of just over $2 for an egg.

In comparison, eggs from Singapore and Malaysia cost about 14 cents each.

The Sunday Times conducted a blind taste test to suss out whether Japanese eggs, known for their distinctive orange yolks and flavour, are worth the price compared with local ones.

The eggs were assessed for both taste and texture, with each judge awarding a maximum of 10 points per category.

Nine brands of eggs - three from local producers - were shortlisted for the tasting. They were all cooked sous vide for one hour 15 minutes over a temperature range from 26 deg C to 64 deg C. 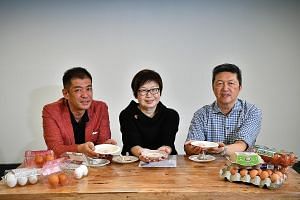 An ode to eggs

Two of the Japanese eggs were from egg producer Sanei Keiran, while four others were from Japanese food importer kokonoE.

The final surprise egg in the judging was brought in by Mr Sato. His restaurant chain, Keisuke Singapore, which has 20 eateries across Singapore, uses eggs produced in Singapore by Tamago-Ya, sister company of local egg producer N&N Agriculture.

The judges had their own favourites, but they were unanimously impressed that the locally produced Tamago-Ya eggs, from Japanese discount chain Don Don Donki, could hold its own against pricier Japanese imports. It ranked No. 2 in the taste test.

Mr Wong said: "We always think Japanese eggs are superior, but from the test, it shows that the local ones are good enough. It is en-couraging for local producers to continue making a good product."

He said in Japanese, via an interpreter: "When I came to Singapore 10 years ago, it was almost impossible to see rich, orange-yolk eggs like the ones in Japan. There has been much progress over the years to produce such eggs in Singapore."

He works closely with local producer Tamago-Ya to ensure the eggs produced for his restaurant group are of a high quality. About 2,500 eggs are consumed in his restaurants daily.

A spokesman for Tamago-Ya, which was set up in 2012 in Lim Chu Kang, said it sells up to 30,000 eggs (including liquid eggs) a day. Its chickens are fed corn and soya bean meal.

After the tasting, Ms Tan said: "I never knew eggs could taste so different. I loved the thick and rich yolk of the Mangetsu Noukou eggs. Yet you can't say local eggs are not up to scratch - look at Tamago-Ya."

VERDICT: The intense orange yolk's texture gave this egg the edge over the rest.

The Sunday Times food editor Tan Hsueh Yun raved about the Japanese egg's "rich and thick" yolk, adding that a tiny pinch of salt or drop of shoyu would add to the flavour.

He added that even though it was cooked in the same way as the other eggs, it looked "more cooked" than some others which had runnier egg whites.

Sold exclusively at Isetan Singapore's supermarket, the eggs are flown in from Japan every Thursday. According to egg producer Sanei Keiran's website, the eggs are specially formulated by adding mugwort, seaweed and marigold, along with sesame to the chicken feed.

VERDICT: Mr Wong said he could eat 20 of these eggs at one go, adding: "It has such an umami flavour and the yolk is creamy."

The judges all agreed the tasty egg requires no additional seasoning. Ms Tan said the thick egg whites and the delicious yolk have an "almost meaty" texture.

Keisuke Singapore's director Nobuyasu Sato, who gave this egg full marks for flavour, described it as "oishii" (Japanese for delicious).

The eggs are produced in Singapore by Tamago-Ya, sister company of local egg producer N&N Agriculture.

VERDICT: The most expensive egg of the lot is Ms Tan's top pick for flavour. "After tasting it, I guess it pays to buy this herb egg despite the price. The egg whites have flavour and the yolk colour is amazing."

With the rich yolk, she said one egg is sufficient for breakfast and would go well with toast soldiers.

The richness of the Japanese egg was a tad too much for Mr Sato. "It is too heavy for me, I prefer an egg with more balanced flavours."

This herb version of the kokonoE Training Egg incorporates thyme and nutmeg into the chickens' feed.

Price: Not for sale, available at all eateries under the Keisuke brand

VERDICT: While the egg had a rich and dense yolk, Ms Tan felt it still lacked flavour. "You need some salt to boost the flavour."

Mr Wong said the flavour does not linger either.

The Keisuke Group has been using these eggs in its outlets such as Omurice Keisuke at Bugis+, Shiokoji Tonkatsu Keisuke at Paya Lebar Square and across its ramen brands. Its Teppanyaki Hamburg Nihonbashi Keisuke Bettei outlet in Peck Seah Street, which offers free-flow eggs, uses about 600 to 700 eggs daily.

VERDICT: This is Mr Sato's top egg for texture. He enjoyed the umami flavours of the egg as they were not too heavy on the palate.

Mr Wong, who also liked it, said: "This one has lighter flavours. The colour of the egg is amazing."

Also produced by Sanei Keiran - the same Japanese egg producer as the No. 1 Mangetsu Noukou - this white-shelled egg contains omega.

Price: $3.45 for six, 58 cents for one, from Cold Storage supermarkets

VERDICT: This is Mr Sato's pick to go best with local toast. "It may not be particularly outstanding in looks or flavour, but the flavours are well-balanced," he said.

Mr Wong described it as a "pleasant egg" and said it is tasty, but lighter in flavour than the eggs that ranked higher on this list.

These eggs by local cage-free egg producer The Freedom Range Co are sold in selected supermarkets as well as by online grocer RedMart.

VERDICT: The judges highlighted the rich and intense yolk of this egg. However, flavour-wise, they agreed it still needed additional seasoning.

Mr Sato pointed out that the egg whites were not particularly tasty and lacked distinctive flavour.

A version of this article appeared in the print edition of The Sunday Times on December 15, 2019, with the headline 'Egg-cellent and hard to beat'. Subscribe
Topics:
More
Whatsapp Linkedin FB Messenger Telegram Reddit WeChat Pinterest Print Purchase Article Copy permalink