While cognac might be associated with smoke-filled drinking rooms and as an older gentleman's tipple of choice, Remy Martin's cellar master Baptiste Loiseau - its youngest at age 36 - insists the grape brandy is "not just for the old guy".

He may be the cellar master for one of the most storied cognac houses in the world, but even he enjoys his Remy Martin V.S.O.P as an aperitif with ginger ale, something that purists may shun.

In Singapore for the launch of the redesigned Remy Martin XO bottle, he says he has had that combination of ginger ale and brandy since he was 18.

"For the past 20 years, we've had La Fete du Cognac, a summer festival on the banks of the river where people drink cognac with ginger ale and tonic - so it's not new," says the native of the wine-growing region.

He left Cognac at the age of 18 to study biology in Paris, then spent time in wine-growing regions in France, such as Burgundy and Champagne, with winemakers. He returned to Cognac to join the House of Remy Martin in 2007. 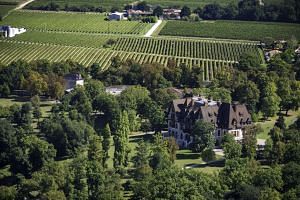 Cognac is made with eaux-de-vie, the liquid produced after the second distillation of grapes, and is typically aged in oak barrels.

While the XO is a more premium product which he has on its own or with ice, he is not above having a bit of fun with the age-old spirit.

"The key point is to explain to the younger generation that we are dealing with the best-quality grapes and terroir (the environmental conditions in which the grapes are grown)," says Mr Loiseau, who has been cellar master since 2014, succeeding Ms Pierrette Trichet, the cognac house's first female cellar master. He is married with a daughter.

His job scope covers everything from checking the terroir and grapes to selecting the hundreds of eaux-de-vie in blind tastings.

Most importantly, he signs off on creating the final blend for the various cognacs under the Remy Martin stable.

Ultimately, he wants cognac to break out of the mould it has been placed in, while respecting the traditions that built it.

"You have to have fun and I want people to experiment - whether it's neat, on ice, in a sophisticated cocktail or otherwise."

While it is still early days in his journey as cellar master, he is ready for the challenges of the spirits industry.

"Of course the world will change - whether it's the nature, climate, so it's not a routine that I'm in," he says. "I have to adapt to the conditions we are facing every year.