It is time for Michelin mania again, with the release of the Singapore Michelin Guide's Bib Gourmand list last Thursday - one week before the announcement of this year's Michelin star recipients on Thursday at a gala event at The Fullerton Hotel.

The Bib Gourmand list features 38 restaurants and hawker stalls - up from the 34 listed in the inaugural edition last year.

They join those that have retained their Bib Gourmand spot, such as A Noodle Story in Amoy Street Food Centre, zi char restaurant New Ubin Seafood in Hillview Avenue and Indian restaurant Shish Mahal in Albert Street.

Like last year, there has been plenty of debate over whether the new recipients are deserving of the accolade, as well as relief that many hawker favourites have not been unearthed by the Michelin inspectors.

If you are planning to check out the new Bib Gourmand-rated eateries, The Sunday Times highlights four that you can start with.

Man Man Unagi Restaurant, located in a back lane off Keong Saik Road, has been drawing long queues every day since it opened in October last year.

At lunch time last Thursday, the day Michelin Guide Singapore released its Bib Gourmand list, the queue that had formed outside the restaurant ahead of its 11.30am opening was nothing out of the ordinary, its owner Teppei Yamashita says. It was about 70 people long. 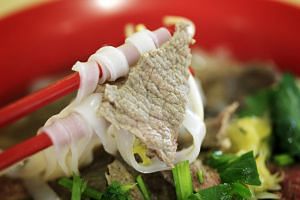 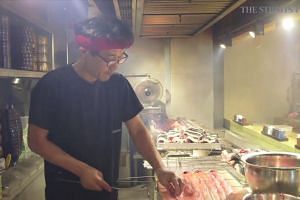 The eight-month-old restaurant is one of three Japanese eateries on the Bib Gourmand list this year.

The others are yakitori restaurant Shirokane Tori-Tama in Robertston Quay and ramen restaurant Tsuta at Pacific Plaza. Last year, there were no Japanese restaurants on the list.

The restaurant sells about 150kg of eel on weekdays and up to about 180kg on weekends.

On why he opened the specialist eel restaurant, Mr Yamashita, 36, says: "I never used to like eel, but after trying live eel, it changed my view.

"I wanted to share this same flavour with customers in Singapore."

He says the texture of eel is more supple when it is slaughtered and gutted just moments before being grilled.

He has also opted for a more purist Nagoya cooking style, where eel is grilled at a high temperature - not grilled, steamed and grilled again like in Tokyo, which changes the texture of the eel.

Heading Man Man's kitchen is chef Hiroki Nakagawa, 40, from Mikawa who is deft at gutting eel. Its belly is first slit open, after which the centre bone, liver and guts are removed in one smooth and swift action.

The eels are still wriggling right until they are placed atop a 1,300 deg C charcoal grill in skewers.

They are charred for 12 to 15 minutes, after which they are dipped into a secret housemade gravy made with soya sauce and brown sugar, among other ingredients.

Mr Yamashita has noticed that while unagi in Japan in usually enjoyed by people in their 50s and 60s, it is young Singaporeans who make up the bulk of the clientele at Man Man.

The Fukuoka native made a name for himself in the Singapore restaurant scene when he opened Japanese restaurant Teppei at Orchid Hotel in 2011, where he quickly gained a following for offering affordable omakase meals with prices that started at $60 a person at the time.

These days, the chef, who came to Singapore in 2006 as a sushi chef for the now-defunct Tenjaku restaurant at Millenia Walk, also runs Hanare Cafe in Tanjong Pagar and the Teppei Syokudo and Teppei Daidokoro outlets.

Another Peranakan restaurant has made it into the Singapore Michelin Guide's Bib Gourmand list - 22-year-old The Blue Ginger in Tanjong Pagar Road.

It joins True Blue Cuisine in Armenian Street, which is again on the list this year. Last year's inaugural Michelin Guide also gave Candlenut at Como Dempsey a star.

Mr Alan Foo, 48, general manager of The Blue Ginger, notes that, together, these restaurants along with those run by culinary doyenne Violet Oon are raising the level and appreciation of Peranakan food and culture in Singapore.

Mr Foo, who has been with the restaurant since it opened in 1995, now not only sees local diners, but also an influx of tourists from Japan, China and the Western countries.

"When we started, people didn't even know what Peranakan food was. Some assumed we were serving Thai or Indonesian food."

Signature dishes on the menu include ayam buah keluak ($18) and beef rendang ($16). The average spending for lunch is $30 a person, while dinner is about $40.

The restaurant was opened by four friends. One of them, Ms Susan Teo, 63, is now the sole proprietor after she bought out the other partners about eight years ago.

The Blue Ginger opened a branch at The Heeren mall 10 years ago, but closed it after the three-year lease expired. It also opened a modern Asian concept in 2015 with the now-defunct May May restaurant in Tras Street.

After more than 20 years in the same spot in Tanjong Pagar, it was refurbished recently to give it a more modern look.

Mr Foo, who hopes the restaurant will eventually expand in Singapore and overseas, says: "After 20 years, the space gets rundown. We wanted to refresh it to reach out to a younger crowd. While we do see more customers in their mid-20s, it is still a group we have to work on."

The restaurant, which was one of the first upmarket Peranakan eateries here, is also among the few establishments in the Tanjong Pagar area that has managed to survive so long.

Mr Foo says: "Back in 1995, the majority of shops were karaoke pubs. Then it became a street of bridal shops. Now, the area is a food hub, with Japanese restaurants on one side, Korean barbecue joints on the other and the rest of us in the middle."

Although the restaurant fills up every night with diners who book a week in advance, Mr Foo says: "I'd like for The Blue Ginger to be one of those restaurants where you need to make a booking months ahead."

With the Bib Gourmand accolade, perhaps his wish will come true. Gourmands in the know have been making their way to Zai Shun Curry Fish Head in Jurong East for years.

And although curry fish head is mentioned in the stall's name, what they usually go for is steamed fish.

The zi char eatery is one of the new entrants on the Bib Gourmand list this year. On offer is whatever is fresh, from red grouper to pomfret to parrot fish.

Diners can opt for the fish to be steamed Teochew-style; Cantonese- style with scallions and soya sauce; or with ginger or fermented beans.

Prices start at about $20, depending on the size and type of fish.

Other popular dishes include bittergourd omelette ($12) and braised fish maw with pork ribs ($20).

Zai Shun is run by the Ong family, including Mr Ong Cheng Kee, 58, his wife and some of his siblings.

It has been at its current location for the last 14 years. Before this, it occupied a hawker stall at Yuhua Village Food Centre for 13 years.

When the stall opened, it served only curry fish head. But at customers' request, Mr Ong decided to offer steamed fish as well. Later, he added more dishes to the menu.

He says: "The most important thing for us is that our customers leave happy and satisfied. To us, customers are like our friends."

The eatery opens at 7am and serves porridge in the mornings.

Regular diners there include Mr Pek Yin Teck, 62, who is involved in his family's Tai Hua Soya Sauce business.

He says in Mandarin: "The fish here is very fresh. The curry fish head is good, but the steamed fish here is the best."

"Being a Teochew, the food is my ultimate comfort food."

A queue snaked between tables in front of Ah Er Soup at ABC Brickworks Market and Food Centre last Friday afternoon. This was not unexpected after the stall landed a spot on the Bib Gourmand list on Thursday morning.

"The queue is twice as long today," says diner Sherry Bu, 33, who goes to the stall once or twice a week.

"I'm very happy for them, but not so happy about the long queue now."

Ah Er Soup is her favourite hawker stall because the soups taste good and do not contain MSG.

The stall has been ladling out soup at ABC Brickworks for the past five years. Signature offerings are Buddha Jumps Over The Wall ($6.50), Lotus Root Peanut Pork Ribs Soup ($4) and Watercress Pork Ribs Soup ($3.50).

The stall is run by Mr Chen Hua Qiang, 50, and Ms Qu Fa Di, 46, from Guilin, China. They have lived here for more than 20 years and Mr Chen is a Singapore citizen.

Their 24-year-old daughter Chen Lin, a bank teller, was there on her day off to help out at the stall because of the long queues they expected after the Bib Gourmand accolade.

Mr Chen says he has years of experience in soup-making after working as a chef in Lei Garden restaurant from 1996 to 2001. He also worked in Si Chuan Dou Hua Restaurant for eight years.

In 2012, he joined two of his friends - Mr Ma Pit San and Mr Nong Gan, who own seven other Ah Er Soup outlets in places such as Superbowl Leisure Park and Pasir Ris - to set up Ah Er Soup in ABC Brickworks.

The couple battle the heat from the large pots from 7.30am every morning and sell more than 200 bowls of soup each day.

"It is hard work, but we put a lot of heart into our soup. Our secret is temperature control and the number of hours we take to brew our soup," says Ms Qu in Mandarin.

They also use premium ingredients such as shark bones in their Buddha Jumps Over The Wall.

When asked if they would make more soup to sell the next day, she says with a laugh: "Well, we have only so many pots."

The stall closes from 2 to 5pm to prepare a second batch of soup and re-opens from 5pm until everything is sold out.