Sesame seeds and anise hyssop in a Hainanese chicken rice recipe has sent some net users into a tizzy.

The recipe was published on online media site Vice's food section, Munchies, last Saturday (Oct 22), with "Hainan Chicken" as the name of the dish. The recipe was created by Canadian chef Matty Matheson, known for his entertaining "how to" cooking videos meant for beginner cooks.

The dish is described as a "simple and flavourful dish that you'll want to make every night of the week". But Singaporeans and Malaysians who love the dish might be startled to discover that Matheson lists as ingredients such exotic items as butter, olive oil, an optional add-on of edible flowers as well as the obscurely exotic anise hyssop, a North American herb whose leaves and purple flowers are used for teas and in cooking.

Displeased fans of the South-east Asian dish were quick to criticise the recipe. Some had never heard of ingredients such as anise hyssop, while others were incensed that Mr Matheson had modified the ingredients of a beloved traditional dish.

User Shawnc commented on the Munchies page: "Thanks! This is why you'll never get authentic Hainanese Chicken Rice outside of Singapore and Malaysia! To be frank - apart from the chicken, rice (you didn't even bother to specify long grain white rice) cucumber and chillies, there's absolutely nothing in this recipe in common with real Hainanese Chicken Rice!"

Another user, Yanting Yeo, wrote: "My goodness... This is not how we serve it here in Singapore! We do not spoon the broth over the rice!! And we cook the rice with ginger and garlic! And why edible flower!?" 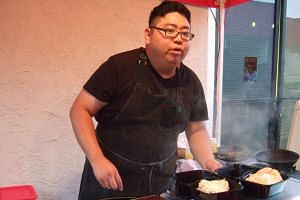 Besides helming hip Toronto restaurant-bar Parts & Labour, the heavily tattooed Mr Matheson is a regular face on the Vice Network with his global travel show Dead Set On Life. The celebrity chef can be seen moose hunting and lobster fishing in the series.

There has been a recent spate of culinary outrage online.

Last month, American food magazine Bon Appetit was accused of cultural appropriation by readers after it posted a video of chef Tyler Akin making the Vietnamese noodle dish pho and explaining how to eat it.

Earlier this month, British celebrity chef Jamie Oliver also earned the ire of Spanairds when he tweeted his recipe for paella. Aficionados of the dish were horrified by his replacing seafood with chicken thighs and chorizo in his recipe.