Paradise Teochew Restaurant has a large menu of popular Teochew dishes, but the flavours can be too mild at times

After closing down a number of its high-end restaurants this year - including those at Suntec City, Marina Bay Financial Centre and the Singapore Flyer - The Paradise Group is moving in a slightly different direction with its latest opening.

It opened its first Teochew restaurant last month, after having concentrated on mostly Cantonese and northern Chinese eateries.

And it seems to be right decision. Paradise Teochew Restaurant at the Chinese Swimming Club was packed both times I was there. Office workers took up most of the tables at lunchtime on a weekday almost three weeks ago, while at dinner time last Saturday night, the place was filled with gatherings of families and friends.

The menu is large, comprising popular Teochew dishes such as braised meats and steamed pomfret, as well as less common ones such as sauteed pomfret fillet with tomato and salted vegetable.

Generally, the cooking passes muster, with light flavours typical of Teochew cooking, but it is a little too light at times.

An example is the Teochew Style Braised Shark's Fin In Casserole ($42.80 a person). My delight at seeing shark's fin on the menu - such a rarity these days - is soon replaced by disappointment. A lot of the appeal of this celebrated Teochew dish lies in the delicious brown sauce the fins are served in, but it tastes bland here.

The Braised Sliced Duck ($16 a portion) also tastes too mild the first time I eat the dish. But it may be because the restaurant is new. The stewing liquid should gain depth with time as it is reused day after day to cook another batch of the dish.

Sure enough, at my dinner last week, the duck tastes much more flavourful. It is a little too lean though, so look out for the slices with more skin attached to the meat if you enjoy the aroma of fat.

If fat does not frighten you, try the Braised Sliced Pork Knuckle ($16) too. The crunchy texture of the thick skin is delightful and I find the taste of the pork better than the duck.

The Teochew Style Steamed Pomfret (seasonal price) is suitably fresh and rather meaty for a 750g fish (for which I pay $67.50). I enjoy it, despite there being nothing distinctive that makes it stand out from what other Teochew restaurants here offer.

Sauteed Pomfret Fillet With Tomato And Salted Vegetable (from $30) is less common in Singapore, even though it is based on a traditional Teochew recipe. The sourish vegetables are refreshing and go well with the fish, but also help to mask its natural flavour. Order it if you want a break from steamed pomfret, though I find it hard to break away from expectations. So I'd rather order the steamed version. 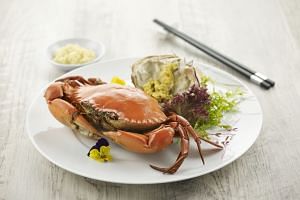 My favourite dish, which I try on both visits, is the simplest. The Crispy Sweet And Sour Noodle In Teochew Style (from $14) are plain egg noodles that are pan fried till crispy and eaten with a sprinkle of sugar and black vinegar.

It does not sound like much but the texture of the noodles - crispy outside and slightly chewy in the middle - wins me over at first bite. The combination of sweet-sour flavours from the sugar and vinegar is very alluring too, and rescues the noodles from blandness.