With more health-conscious diners looking to go green, a crop of new vegetarian restaurants has sprouted over the past six months.

But these are not your usual salad bars or raw food eateries. They range from vegetarian kiosk Great at Tanjong Pagar Centre to Tibetan-inspired restaurant Ganglamedo in Craig Road.

To cater to those looking for a plant-based diet, business owners are becoming more creative in the ingredients and flavours used - and shying away from mock meat where possible. They are also catering to the palates of "flexitarians" - casual vegetarians who are unable or unwilling to eliminate meat from their diet completely.

Ms Anita Yuan, owner of Ganglamedo, offers plant-based items and a special cordyceps menu - all in a fine-dining setting.

She uses ingredients from Tibet as well as Chinese herbs and spices in the cooking, and chefs at the restaurant were sent to China to master healthy and nourishing recipes.

Over at Kilter Avenue, vegan restaurant HRVST is part of the lifestyle space which houses a gym. 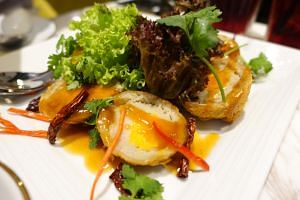 15 places to go for vegetarian food in Singapore

It is helmed by chef-owners Addis Tan, 29, and Dylan Choong, 35, who have worked at the likes of Tippling Club, Esquina and Cheek by Jowl. Choong is vegetarian, while Tan aims to go vegan three times a week.

Tan says: "As chefs, we have always had the idea to present vegan food like any other kind of food, without prejudice. We don't want to be bogged down by preconceived notions that it's too boring or too healthy. We are just making food that happens to be vegan.

"It's perhaps not so much making vegan food cool, but to make it so commonplace that people don't look at it as an alternative."

They also have plans to test a vegan street food brand called Hello Baby with a pop-up concept.

Over the past year, Mr Yuan Oeij, 48, chairman of The Prive Group, has been working on increasing vegetarian and vegan items across the restaurant group's outlets.

He says: "The direction is to provide offerings for vegans and vegetarians, and even those starting to embrace the plant-based diet.

"We may not be as progressive as some Western countries, but we are starting to pick up the pace."

As for Si Chuan Dou Hua Restaurant, it has been collaborating with Taipei's Yang Ming Spring Green Kitchen for three years and is offering "vegetable-forward" menus until Aug 5 at its outlets at UOB Plaza and Parkroyal on Beach Road.

Observing a "significant shift" towards healthier options, its executive director Wee Wei Ling adds that after the promotion is over, selected items will be introduced to the a la carte menu at the UOB Plaza outlet.

Self-described flexitarian Jeremy Tan, 32, makes it a point to go vegetarian at least twice a week.

The sales manager says: "There are more options now - not just salads or vegetarian hawker food with mock meat.

"I like the wide range of dishes available at Green Signature and I also like the food from vegetarian chain Greendot. I doubt I can ever be fully vegetarian, but maybe, over time, I won't feel like meat is missing from my life."

The five-course set ($49.90++) includes the highlight hot pot with a choice of soup base, as well as an assorted vegetable platter. A special cordyceps menu ($88++) includes Nagqu cordyceps double-boiled soup and noodles with Chinese truffle and cordyceps. The dishes are also on the a la carte menu, along with other highlights such as fried spinach pancake ($12) and dry tossed cordyceps flower ($12) with carrot, radish and enoki mushrooms.

A quick and convenient vegetarian option in the Central Business District, this kiosk offers a selection of rice and noodle bowls as well as burgers. Menu offerings include vegetarian fish head noodles (from $6.90); grilled king trumpet mushroom burger (from $6.90); and Power Bowls (from $6.90), with toppings such as edamame, cashew nuts, pumpkin seeds and beancurd.

Open: 11.30am to 7.45pm (Mondays to Saturdays), closed on Sundays and public holidays

Info: Call 6581-8164 or go to www.facebook.com/thehealthierburger

New items include an appetiser of beancurd noodles with cheese and fresh fruit, and baked water bamboo shoots with Japanese miso. A new dessert, aiyu jelly with fresh lemon, is made with the seeds of the Awkeotsang creeping fig, which is native to Taiwan and other East Asian territories.

Other highlights include taro and mushrooms served on Japanese magnolia leaf, and stir-fried fresh peas in a vermicelli nest.

Returning favourites include bright green mushroom ball with spinach puree. The ball, which is encased in Vietnamese rice paper, contains several types of fungi such as abalone mushrooms and matsutake mushrooms.

Open: Noon to 2pm (Tuesdays to Fridays), 6 to 11pm (Mondays to Saturdays), closed on Sundays

A konjac "crabmeat" patty is topped with a sweet and tangy sauce, romaine lettuce, coriander, cabbage and vegan mayonnaise and served in a wholemeal bun. Add $5.90 for curry fries and ginger lemonade and complete the meal with VeganBurg's new coconut pineapple ice cream ($4.90).

When: Order online from July 9 at veganburg.oddle.me or in-store from July 16

A version of this article appeared in the print edition of The Sunday Times on July 01, 2018, with the headline 'A harvest for vegetarians'. Subscribe
Topics:
More
Whatsapp Linkedin FB Messenger Telegram Reddit WeChat Pinterest Print Purchase Article Copy permalink