At last count, Mr Arthur Agraviador, a relationship manager in the finance industry, owns about 60 pairs of shoes - a number far higher than what his wife has.

When it comes to dress shoes alone, the relationship manager has at least 18 pairs.

"One should never wear the same pair of dress shoes two days in a row, so that they get a chance to breathe and will last longer. It is also my excuse to buy more shoes," says Mr Agraviador, 49. Originally from the Philippines, he has lived here for seven years.

So precious are his dress shoes, which can cost up to thousands of dollars a pair, that he takes them off and walks about 100m home barefoot from the MRT station when it rains.

Ever since he started reading men's magazine GQ at the age of 12, Mr Agraviador has made shoes the focus when dressing up. "You can be wearing a top-of- the-line suit, but if your shoes are mediocre, you'll look like a slob," says Mr Agraviador, who is wearing a pair of burgundy dress boots from Spanish label Carmina at this interview. 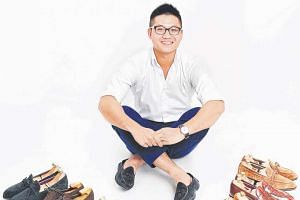 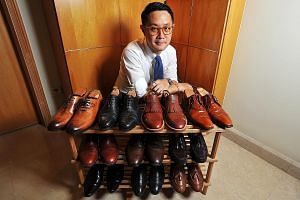 Stylish soles: Always on even heels

Crafted out of shell cordovan that comes from connective tissue in the buttocks of a horse, his burgundy Carmina boots are "so soft they melt to your feet", describes the shoe connoisseur.

When buying a pair of shoes, he avoids anything with odd details, so he will not be caught in shoes that curl up at the toe, or square-toed shoes.

"I like classics with a twist - like a pair of ordinary brogues differentiated by its stitching or punch-hole pattern," he says.

A fan of dress boots, his biggest shoe splurge has been on a pair from Vienesse label Saint Crispin's that cost about $2,000. His straight wing oxfords and austerity brogues from the label also came close to $2,000 each.

"I'm of an age where I've already bought all the disposable stuff - shoes that last only a couple of months," he says, explaining why he does not mind splurging on footwear.

Other brands he owns: heritage shoe labels such as J.M Weston, Anthony Cleverley, Edward Green, Crockett & Jones and Edwards of Manchester. Many of them range from $1,500 to $1,800 a pair and were purchased from all over the world.

As he has already shelled out plenty for his fancy shoes, Mr Agraviador thinks nothing of spending an extra $50 on a pair of wooden shoe trees that are made specially for each pair of shoes. These help to maintain the shoes' shape and absorb moisture. To keep his shoes in tip-top condition, he wipes them before and after using them and stores them in their original boxes.

"My five-year-old son has already started asking if he could have my shoes some day and I'm pretty sure that they will last until then."

A version of this story first appeared in the November 2015 issue of The Life e-magazine in The Straits Times Star E-books app.

A version of this article appeared in the print edition of The Straits Times on July 23, 2015, with the headline 'When it rains, he walks barefoot'. Subscribe
Topics:
More
Whatsapp Linkedin FB Messenger Telegram Reddit WeChat Pinterest Print Purchase Article Copy permalink