When Mrs Melania Trump appeared at the Republican National Convention in July, Vanity Fair magazine compared her with Kate Middleton, the British royal who is a global style icon.

Mrs Trump, 46, was wearing a stunning white dress with puff sleeves that night, hours before her husband Donald Trump claimed the Republican nomination for president.

Her outfit by Serbian-born and British-based Roksanda Ilincic quickly sold out after she wore it, a sign that the former model from Slovenia turned First Lady-to-be may well be on her way to becoming a fashion trendsetter.

Her choices might also stir some debate, as questions then were asked as to why she did not choose a dress by an American designer. 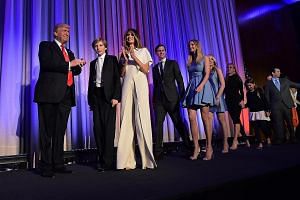 Is fashion's love affair with Washington over? 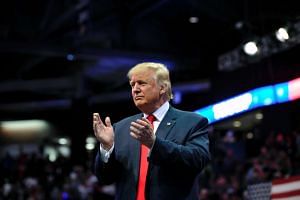 She also aroused talk when she wore a fuchsia pink pussy-bow shirt to the second television presidential debate and a black pussy- bow Ralph Lauren creation to the next one.

People thought her picks were intentional, coming just after her husband was revealed to have talked about grabbing women "by the p***y" in a leaked recording from 2005. But a Trump campaign spokesman denied it was intentional.

Fast forward to election day last Tuesday. She appeared, displaying a style she has been most noted for - by balancing a long coat on her shoulders that barely covers her white shift dress.

The Telegraph's fashion editor Victoria Moss wrote: "Her efforts here are accomplished. On stage in Iowa, after introducing her husband as 'the best master negotiator', she stepped back from the lectern, flicked that perfect blow-dry delicately over her shoulder, and all without her bright red coat budging an inch. That's not just rigid tailoring and a sturdy shoulder-pad; that's professional."

Do these form the signature style of the next queen of the White House? Given her fashion background, she will keep everyone watching in the years to come.

A version of this article appeared in the print edition of The Straits Times on November 14, 2016, with the headline 'Style icon in the making'. Subscribe
Topics:
More
Whatsapp Linkedin FB Messenger Telegram Reddit WeChat Pinterest Print Purchase Article Copy permalink