This is one trend with legs.

In the span of only seven months, no fewer than three multi-brand sneaker shops have popped up, with a focus on non-performance, lifestyle sneakers.

First came Seek last November. Owned by the Known Group, the people behind lifestyle retail store Cumulus and Nimbus at Wheelock Place, the 2,000 sq ft space is a multi-label activewear store carrying a merchandise mix of apparel, accessories and footwear. It carries brands such as Asics and Nike and prices range from $199 to $299. 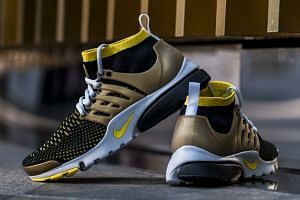 He is the general manager of Limited Edt, the parent company of the three stores. Prices for sneakers at L.E Underground for brands such as Asics and Onitsuka Tiger range from $99 to $199.

I used to be a dancer and that really got me into wearing sneakers every day. I also like that the shoe brands are always evolving and coming up with better shoes.

FINANCIAL ANALYST DIANA SANCHEZ, who has about 20 pairs of sneakers

Hot on the heels of these two, The Social Foot is the latest venture from the Royal Sporting House (RSH). Launched last week at Orchard Central, this is the first lifestyle sneaker venture from the fashion, sport and lifestyle retailer and distributor of brands such as Ted Baker and Speedo.

With shelves and displays that can be reconfigured to suit workshops and events, the 860 sq ft store aims to target the hip and chic with cutting-edge brands such as adidas and New Balance, alongside its roster of 12 brands which includes Reebok Classic, Pro-Keds and Saucony Originals. Prices range from $69 to more than $200, depending on the shoe.

Mr David Westhead, 45, RSH's Asia-Pacific chief executive officer, says The Social Foot came about because of customers' demand "for casual, lifestyle sneakers" at the other RSH stores, which carry only performance and training shoes.

Multi-brand sneaker shops may not be a new phenomenon, but retailers The Straits Times spoke to say they have seen a greater demand for them in recent years due to a variety of reasons.

These range from the rise of the athleisure trend to sports brands producing a wider selection of styles to more women buying them.

A blanket term for activewear that is not meant for performance sports, athleisure is on the rise and has seen the evolution to a more relaxed and casual wardrobe.

Bolstered by high-fashion offerings from designers such as Alexander Wang and Karl Lagerfeld for Chanel, this trend has paved the way for sneakers to move seamlessly from basketball courts to boardwalks.

Mr Philippe Le-Bretton, 53, general manager of Puma Southeast Asia, adds: "Today, more than ever, we see fashion and sportswear merging in the gym and on the track and streets.

"Athleisure has become increasingly acceptable and many consumers are quickly jumping on the trend."

The revival of heritage shoe models, such as the adidas 1960s tennis Stan Smith shoes, has also led to a renewed interest in sneakers as fashion wear, especially for those in love with nostalgia.

Mr Chopra thinks it is a "very interesting time for sneakers" as more sneakers companies such as adidas, New Balance and Puma are "stepping up their game" and releasing and revamping older models.

But sneaker companies are not merely rehashing old models - they have also widened their offerings to meet the needs of their consumers who want shoes that are both stylish and functional.

Whereas in the past, sneakerheads tended to be predominantly male, in recent years, they are finding new fans among Singaporean women.

This is a fact that Mr Westhead has noticed - women here tend to favour them over formal shoes, compared with their counterparts in China or Europe.

Statistics bear this out.

At The Social Foot, women make up 40 per cent of its customer base.

More than 20 per cent of last year's 2,300 attendees were women. The convention, held at Zouk since 2013, showcases limited-edition sneakers by artists and collectors as well as street culture through art, live music acts and photography.

Members can also buy sneakers from vendors or trade with fellow collectors.

Retailers have responded by opening stores that cater exclusively to women such as P.V.S at Orchard Cineleisure.

Opened in 2012, it is the sister store to Leftfoot, a 13-year-old sneakers specialist store at Orchard Cineleisure and The Cathay.

Ms Diana Sanchez, 24, a financial analyst, is one such fan. She has about 20 pairs of sneakers which are mostly from Nike and adidas. She shops online at sites such as www.footlocker.com and, locally, at Nike stores or Limited Edt.

She says: "I used to be a dancer and that really got me into wearing sneakers every day. I also like that the shoe brands are always evolving and coming up with better shoes."

As a result of all these factors, Mr Chopra has seen brisk business, despite the less-than-ideal retail climate. Without revealing numbers, he says: "We have definitely met sales targets and it is beyond our expectations. I would say all our stores are doing quite strongly."

He has a total of nine sneaker stores under Limited Edt.

Similarly, Mr Westhead says sales have "exceeded base target" for The Social Foot, at "double digit above expectation".

He estimates that sales from the store will account for 8 per cent of RSH's total turnover this year. There are also plans to open 50 stores in the Asia-Pacific region over the next five years.

Seek, which opened its first store in Singapore at Raffles City last September, has another outlet at Ion Orchard and two stores in Thailand. It plans to open more stores in the next three years and expand to Indonesia and Malaysia.

Mr Irwin Lim, director of Known Group, declines to share Seek's sales figures, but says that they "foresaw the demand for active lifestyle products in the region despite the general retail climate".

Despite the threat of online retailers, the stores are optimistic. All three newcomers believe that their mix of products, interesting store designs and the quality and product knowledge of staff will help engage consumers.

Some, such as The Social Foot, have even chosen to market the store exclusively on social media platforms Instagram and Facebook to capture the brand's core audience of 20- to 35-year-olds.

To fuel the Instagram generation's love of selfies, images taken at The Social Foot's in-store photowall are projected on a screen at the front of the store. Says Mr Westhead: "You have to innovate or die."

Although there are brand overlaps at these shops, there is a sense of community among them.

The retailers tell The Straits Times they do not see one another as competition, saying that each store has its own distinct DNA.

Mr Kevin Low, 41, co-founder of Leftfoot, welcomes the new influx of multi-brand sneaker shops, saying that it "creates a more vibrant and exciting shopping experience for consumers as a whole".

Sneaker fan Clement Tan, 26, who has about 30 pairs from brands such as adidas, Puma and New Balance, enjoys the "freedom to choose".

He bought about 80 per cent of his sneakers from Limited Edt. He says: "More stores mean I don't have to rely on one store to buy my shoes."

A version of this article appeared in the print edition of The Straits Times on May 12, 2016, with the headline 'Sporting a fashion statement'. Subscribe
Topics:
More
Whatsapp Linkedin FB Messenger Telegram Reddit WeChat Pinterest Print Purchase Article Copy permalink