SINGAPORE - A snaking queue formed around Uniqlo's new flaghip store at Orchard Central mall in the early hours of Friday, with shoppers waiting for doors to swing open at 10am.

At its peak at about 7am, there were about 2,000 people in line, according to security guards there.

The goal: A welcome gift bag comprising a limited-edition tote - designed by four illustrators based on their perspectives of Singapore - mall vouchers, a welcome drink, and a Uniqlo aluminium sports bottle.

There was still a queue when The Straits Times went down at 10.30am, but it was fast-moving by then.

The three-storey store is the high-street fashion brand's first flagship in South-east Asia. The Japanese brand, which opened its first store here eight years ago, now has 25 Uniqlo stores in Singapore. Worldwide, there are more than 1,700 stores spanning countries such as Australia, China and Germany.

Ms Chew Hsiu Chin, 24, who works in healthcare, started queueing at 9.40am for the exclusive bag.

"I thought I wouldn't get the bag but I did, (I am) quite happy about that," she said. "I think the store is worth queueing up for." 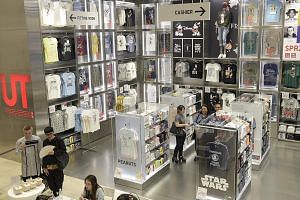 "It's a little different from other Uniqlo stores. The layout is quite intuitive - you roughly know where to find things," she said, adding that she bought three jogger pants for her boyfriend and spent $119 in total. "I would come back again."

Mr Daryl Wang, 32, a therapist who worked near the store, was not as lucky. He started queueing at 10am and did not get the bag. However, he ended up spending about $70 on a long-sleeved shirt, polo T-shirt and shorts.

"I start work at 11am and thought I might as well come down and take a look cos I heard there were exclusive collections," he said, adding that he waited for 10 minutes.