China's First Lady Peng Liyuan seemed to have spent too much time in the powder room at a dinner in London's Guildhall on Wednesday (Oct 21).

The stylish Ms Peng was photographed with powdery white smears around her forehead, nose and upper lip - to the horrors of fans and fashion critics alike.

Many were quick to blame it on over-zealous powdering by her make-up artist who was perhaps too eager to make Ms Peng look flawless at the high-profile event.

But some said silica powder may be the real culprit.

The powder can help absorb oil and control shine - but it may backfire if too much is applied.

So what looks perfect in normal lighting may look very wrong under the harsh lights of flashing cameras.

But some say that even if that was the case, the makeup artist should still take the blame.

Said Hong Kong fashion designer William Tang: "So embarrassing. It's the makeup artist's fault for not taking into account the possibility of strong flashlights. Considerations must be made for such an important person and at an important event." 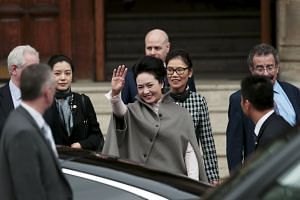 According to Hong Kong's Apple Daily, photos and comments on the make-up malfunction have been wiped out from Chinese websites and social networking site Weibo.

If it's any consolation for Ms Peng, some Hollywood A-listers, including Angelina Jolie, Nicole Kidman, Drew Barrymore and Kate Winslet, have also made the same mistake.

In April last year, Jolie appeared at the New York premiere of HBO drama The Normal Heart with white powder all over her face.

Commenting on Jolie's make-up faux pas, celebrity makeup artist Jamie Greenberg told Us Weekly: "Many women think you can just touch up with any powder for a red carpet event, but all powders have different finishing textures."