At eyewear chain Owndays, staff do not wear suits.

In fact, its group chief executive officer Shuji Tanaka has banned employees from wearing suits in the Tokyo headquarters and regional offices in Japan. The 39-year-old says that doing so dulls one's creativity.

"(Most employees in) Japanese companies wear the same suit and clothes every day. But if you have to choose what to wear in the morning every day, it forces your brain to be creative," he says in Japanese.

The married father of one, who is based in Tokyo, is known to turn up at work in T-shirt and shorts, but was decidedly more dressed-up for his interview with The Straits Times recently.

He was in town for the Owndays Singapore annual dinner and dance and was wearing a pair of black high-top Jimmy Choo sneakers, black jeans and a blazer. 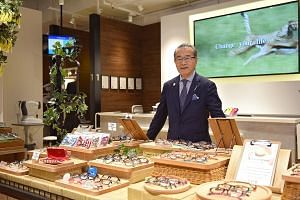 Wearing spectacles to make a fashion statement is all the rage 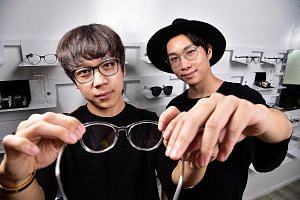 60 pairs of specs to match her mood, outfits

The seemingly innocuous no-suit ban has paid off.

Owndays has 25 housebrands now, each with unique designs. Some frames have temples that resemble the fretboard of bass guitars, others are adorned with silver crosses and arrows.

There are lightweight frames, round frames and metal frames so thin that they look almost invisible.

Mr Tanaka, who enjoys kickboxing in his free time and wears glasses despite having perfect eyesight, got into the optical business because he saw a "potential to be a leader in the market".

"I bought over Owndays because I saw that there was no optical company that was the strongest in the world, so I thought there was a chance to be a No. 1 in this market," he says, adding that he owns "too many spectacles to count".

Mr Yoshiki Moribe started Owndays in 2002. In 2008, at age 30, Mr Tanaka bought over the company, which was chalking up $25 million in annual revenue at the time. Under him, Owndays hit a worldwide revenue of $140 million last year, of which $36 million came from the Singapore market.

The company now has more than 180 stores in 10 countries and plans to expand into India, Indonesia and Russia soon.

The first Owndays outlet here opened in Plaza Singapura in 2013. It will open its 23rd store at The Clementi Mall at the end of the month.

As for any concerns that the short turnaround time may mean a wonky vision test, Mr Takeshi Umiyama, 33, manager director of Owndays Singapore, says that eye tests are done by certified opticians and optometrists.

A team of in-house optician trainers also conducts regular training and reviews, he says, adding that if a mistake is made, customers have a year to get up to two lens degree changes at no extra cost.

As for the current trend, he says: "Spectacles can change a person's look and play a part in making the first impression. I think Singaporeans have come to realise this and, increasingly, people buy and own more pairs of glasses to match different outfits and occasions."

A version of this article appeared in the print edition of The Straits Times on April 20, 2017, with the headline 'Owndays sets its sights on the world'. Subscribe
Topics:
More
Whatsapp Linkedin FB Messenger Telegram Reddit WeChat Pinterest Print Purchase Article Copy permalink