Potted plants are used to fill up space on level two, where there appears to be more empty units than occupied ones.

The Nihon Street, which features Japanese food outlets with a strong following, looks like it is still in the works, with sections behind hoardings.

The entire section where Harvey Norman used to be has been cordoned off. A fitness and performance centre is slated to take over the space in October.

Level 1 looks more lively thanks to the F&B tenants, some of which have expanded, although there are pockets of vacant units too.

Bank executive Melissa Tan, 31, who works at one of the nearby office towers, says she goes to the mall for lunch with her colleagues. "Apart from the food, there's nothing much for me to buy or see here." 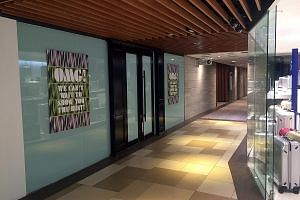 With the mall currently undergoing renovations, bright red and white hoardings can be seen on nearly every level. While the boards feature happy faces and mouth- watering food pictures, they also make the place feel like a building in stasis.

The $50-million makeover, which began last May, is scheduled to be completed later this year.

The mall's active occupants include shoe store Bata, Starbucks, womenswear label Iora and Singapore department store Metro which took over from Robinsons as the anchor tenant in 2014.

Ms Rashmi Gogna, 47, owner of Pure Earth, a womenswear store on level two, says: "People know where you are when you say you are at Centrepoint. The recall is not as strong for some of the newer malls.

"Business is dull now, but I am confident that when new tenants come in, it will be fine and business will be back to usual."

Large areas of hoarding can be found on levels one through six, with some filling entire areas that could fit at least four to six tenants. Construction noise can be heard on various levels and the smell of concrete and dust permeates the air around the boarded up spaces.

The renovations are scheduled to be completed later this year. The shops on the lower levels are open for business, but the hoardings make these stores more difficult to find. The many hoardings also give the impression that the entire mall is closed for renovation.

A salesman at a boutique on level five, who declines to be named, says: "Sales have dropped by more than 50 per cent since the renovations started. People think the mall is closed. Especially tourists. When shoppers see that level two has so many hoardings, they don't go to the higher levels."

From the street, the steel-and-glass mall that sits between Knightsbridge and Robinsons The Heeren looks finished. But only a few shops are occupied.

The mall, completed last year, has four floors for retail and three tenants so far: private safe deposit Vault@268 in basement one, UOB Privilege Banking on level 11 and Japanese fashion brand Christian Dada on level one.

Walk into the mall and you are greeted by a big blank hoarding right in front of the entrance. A sign directs UOB customers to walk around the hoarding and to the lifts behind.

Ngee Ann Development, which owns the mall, declines to comment.

There are many empty units on levels two and three. Some have concrete flooring showing, while others are dusty.

The busiest-looking areas of the mall are the rest areas, where the couches are usually fully occupied.

Student Ariel Lee, 17, who was lounging on one of the couches on level two, says: "I'm not here to shop. I'm waiting for my friends so that we can catch a movie together. I'm making use of the free Wi-Fi," she says.

If you walk around the mall, business seems brisk. The units are fully filled at basement one and there is a healthy crowd at Food Republic on level four.

But levels two and three are rather quiet, after department store Isetan closed last year. It is in the midst of renovations and leasing out the space.

From now till June 30, level one where Isetan used to occupy, is taken up by a pop-up flea market by Workshop Element (W.E.) and Togetherly.

The other end of level one - the section where Gap used to be - is covered by hoardings. One says a new Japanese izakaya is opening in May, but the other hoardings do not indicate what new tenants are moving in.

"There's really little traffic here," says Mr J. Lee, 28, a shop assistant at one of the watch shops on level two. "We just keep ourselves busy by cleaning the display cabinets, arranging the timepieces, chatting with one another and playing with our mobile phones."

The first floor of Shaw Centre may have an impressive Polo Ralph Lauren flagship, but levels three and four have about 10 empty units each.

Given the mall's long and narrow layout, shoppers have to walk past the empty units to get to the washroom or restaurants. Each boarded- up unit has its unit number clearly labelled and the leasing agent's contact details.

The stretch of units alongside Japanese ramen restaurant chain Ippudo on level four is completely boarded up.

"Of course the lack of tenants affects business. Our sales have dropped more than 20 to 25 per cent since we moved here in January this year."

Still, Mr Low, who has signed a three-year lease, is hopeful. "I will wait it out," he says.

Except for Adidas Originals on the first floor, all the other units on the ground floor are unoccupied.

Much of the traffic comes from members of True Yoga on the fourth floor and Bikram Original Hot Yoga on the fifth floor.

Mr Richmond Goh, 58, who has been going to True Yoga at the mall for the past eight years, says: "I don't bother with the shops here, since Ion Orchard and Isetan at Shaw House are nearby. I come here just to do yoga. Once I'm done, I leave."

Though the higher levels of the mall are mostly filled with various tenants that include fashion outlets, jewellery stores and hair and nail salons, the first level of Far East Plaza looks almost deserted. While levels two through five have the odd handful of shuttered units, level one has at least 20 empty units.

The only busy spaces on the level are the F&B outlets which include bubble tea store Gong Cha and noodle restaurant Eat.

A salesman at a boutique on level one, who declines to be named, says: "When shoppers see that so many stores are closed, they don't come to our store. There are more shops upstairs, but this level is really empty."

Correction note: An earlier version of the story stated that UOB Privilege Banking is located on level 1 of 268 Orchard Road. This is incorrect. It should be level 11. We are sorry for the error.

A version of this article appeared in the print edition of The Straits Times on April 28, 2016, with the headline 'NO TENANTS... AND NO SHOPPERS'. Subscribe
Topics:
More
Whatsapp Linkedin FB Messenger Telegram Reddit WeChat Pinterest Print Purchase Article Copy permalink