LONDON • LVMH and Kering, watch out.

Michael Kors is close to announcing a deal to buy Italian fashion house Versace, in its latest step towards becoming a rival to Europe's luxury conglomerates.

The sale would represent the end of independence for one of the most prominent stand-alone fashion houses amid a wave of consolidation within the industry.

Last month, Ermenegildo Zegna acquired an 85 per cent stake in Thom Browne, in a deal that valued the American fashion company at US$500 million (S$680 million).

Versace, known for a flamboyant embrace of elegance, had long been considered a takeover candidate.

In 2014, the Blackstone Group, the American private equity giant, bought a 20 per cent stake in the company and Versace had been exploring publicly listing its shares. 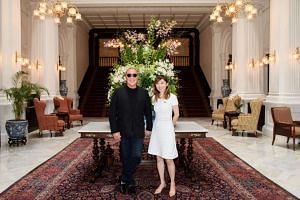 However, in January, its chief executive officer, Mr Jonathan Akeroyd, cautioned that "there is no rush" to hold an initial public offering.

For Michael Kors, the purchase of Versace would burnish its ambitions to become an American counterpart to LVMH and Kering, which have dominated the industry with brands such as Louis Vuitton and Gucci.

Versace, controlled by its namesake family since the 1997 murder of founder Gianni Versace, offers Michael Kors an intriguing canvas of possibilities.

The Milan-based brand is known for its Medusa-head logo, glamorous gowns and bold printed pieces that sell for thousands of dollars.

Although it struggled financially after Versace's death, it turned around its fortunes by slashing debt and ending some franchising and licensing deals.