Mr Kent Teo, founder of Invade Industry, which runs some of Singapore's largest flea markets, is giving the shopping scene here a boost

If retail is in a slump, then Mr Kent Teo is perhaps the person to poke it in the small of its back, straighten its hunched shoulders and set its face in the right direction - on an experimental new path.

Mr Teo, 32, is the founder and chief executive officer of Invade Industry, a seven-year-old events and space activating company.

Invade runs some of Singapore's largest flea markets under the name Fleawhere, the top flea market brand locally; has set up a real-time booking platform called invade.co connecting retailers looking for pop-up spaces with landlords; and is responsible for events such as iLight Marina Bay's festival markets and Tanjong Pagar Railway Station's 160-stall open house in September last year, which made history with 55,000 visitors in one day.

Invade also organised Artbox in April this year, the Thai outdoor market concept that saw a record-breaking 660,000 visitors over six days at the Bayfront Event Space.

It was perhaps too well-received: After complaints on its first day from visitors about overcrowding and poor organisation, Mr Teo says, he had to remove some of the structures so that there was more breathing space, and introduce wireless paging systems for food stalls so that queues were not necessary.

The turnout made it clear to him that the demand for such events is phenomenal. "Artbox is proof that you can literally get 10 per cent of Singapore's population to come down to visit. Each day drew three times the crowd of the average National Day Parade," he says.

Not content with just owning and operating the Artbox franchise, he is launching a new creative market concept next month. 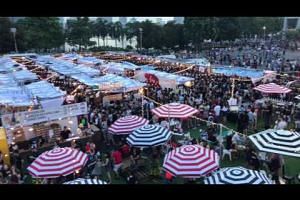 Flashbang, held with the support of Singapore Tourism Board, is a market that will take place from Dec 9 to 30 at the open-air carpark on Grange Road.

The 50,000 sq ft space will host 120 retail and food and beverage stalls, craft workshops, neon-art installations, sculptures and live music. At night, one of the highlights is a neon party zone where visitors can have fun with body paint and glow sticks. The market will also be filled with neon art installations.

Learning from Artbox's shortcomings, Flashbang will have just one entrance and exit for smooth, one-way traffic flow. The breathing space between stalls will also be double that of Artbox. Additionally, Flashbang is partnering Grab to make use of its mobile payments service, GrabPay.

Even before the event has run, Mr Teo says, there has already been an invitation from Johor Baru for him to take Flashbang there.

That may sound premature, but it is only one of his innovative concepts that seems to be taking off at breakneck speed.

Mox's members include customised products maker Snupped, which is producing Flashbang merchandise; and Neon Project, which makes customised neon signs and will be responsible for Flashbang's light installations. 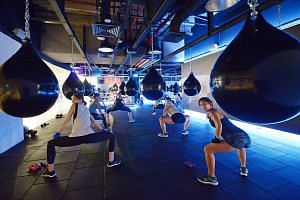 Mox's rates start at $295 a month for a flexible desk space. The facility also offers co-making spaces such as a sewing room, a woodworking room, a photography studio and a 3D printing studio for rentals as short as one hour.

Even though it is only one month old, there are already plans to expand Mox, Mr Teo says.

Landlords in the Orchard Road, City Hall, Central Business District and Jurong areas have approached him about opening outlets there.

"The retail landscape is evolving. They see it as an alternative to the retail game," he says. The second Mox, he adds, is likely to open at Orchard Central in March. It will be "more social, maybe with a DIY craft bar, or tea and coffee appreciation sessions".

Retail spaces lack interesting concepts. We are taking these spaces and experimenting with them.

Clearly, retail wastelands are thirsty for new initiatives such as those Mr Teo pioneers. "Retail spaces lack interesting concepts and content. Retailers are still trying to figure that part out. And we are taking these spaces and experimenting with them," he says.

"Online content can be refreshed every day, every minute. But offline, it's hard to do. That's why we have become the go-to bridge between landlords and retailers when it comes to spaces of potential. We fill the gap that no one wants to fill and which no one has quite figured out yet." Invade works with about 40,000 retailers and more than 100 landlords.

This is no mean feat for someone who failed his A levels. Unable to qualify for entry to a local university, Mr Teo enrolled in Singapore Institute of Management's University of London programme and because "I didn't know what to do with my life", chose the business course with the longest name: Business Management And Economics.

It was during his studies there that his involvement in flea markets began. His girlfriend, now his wife, took part in flea markets organised on the university's premises, selling clothes that the couple bought during trips to Bangkok's Platinum Mall and Chatuchak market.

Mr Teo figured that instead of simply keeping her company, he could sell the jewellery he made, such as rings made with old Scrabble pieces and alphabet keys from old keyboards that he would scrounge up from the now-defunct Sungei Road Thieves' Market for $1 a keyboard. He sold the rings at $4 each.

Upon graduation, he decided to start a bootstrap business with a friend from primary school, organising flea markets. The partnership lasted five years. "The company was called For Flea Sake - with a grammatical error," he says. The first flea market they organised was at Old School at Mount Sophia, with about 20 stalls selling second-hand clothes and accessories.

For about a year, Mr Teo survived on a pay of about $200 a month. "My mum was concerned. She said, 'Why are you organising pasar malams? Do you have enough to eat?' She would make me fried rice, using leftovers from the day before. I saved money that way." His father, 60, a senior technician at a petroleum company, would give him a lift or let him use the family car.

In contrast, his younger brothers were both academic overachievers. One, aged 29, was a National University of Singapore scholar and is now an analyst in a shipping company. The other, aged 23, has a four-point grade average and is studying at Nanyang Technological University.

"Until you are successful, you are seen as insane. It's a route that nobody wants to take. People didn't see it as a proper business," says the father of a two-year-old son.

"But I always believe the more hardworking you are, the luckier you get. You have to stay focused and things will happen."

His first breakthrough came when he clinched the underground space at *Scape in Orchard Road.

His flea market there on weekends grew to encompass 120 stalls. The going rate was $50 for a table and two chairs.

Mr Teo set up the booths and lights himself and distributed flyers advertising the event.

Eventually, there were between 500 and 600 new subscribers every month and the event sold out every weekend. It was so popular that about seven other competitors sprung up and tried to muscle in on the *Scape turf.

But Mr Teo was already turning his attention to digitising his platform. He built a site where vendors could select the number of tables and chairs they wanted, add them to a cart, check out and receive immediate confirmation. That was rebranded as Fleawhere.

He also set up Space Invasion, pop-up spaces at malls including Cineleisure, The Cathay, I12 Katong, 313@Somerset and Orchard Gateway. These events, lasting from a few months to a few years, collect retailers in one space and earn rent and commission from them. In October 2014, as landlords began offering him spaces for free, he decided to consolidate the business under the name "Invade".

The company's projected revenue for this year is $3 million

Now, he says, Invade is "building our own micro-ecosystem, with Fleawhere, Mox, Artbox and Flashbang, in which we empower retail creatively". For instance, retailers from Mox are activated to take part in Flashbang.

In Mr Teo's opinion, "the No. 1 killer of retail is not e-commerce, but social media". Because of the entertainment and engagement that social media provides, people feel less need to go out.

"Retail spaces are increasing every year. But the demand for such spaces is decreasing," he says. "The window of time between one permanent store's closure to another store's opening is expanding. That is where there is room for pop-ups. There is room for flexibility and innovation."

So, the best way to get people out of their houses is to give them something new to experience.

The truth is that "aesthetics, design and form over function - these things appeal to visitors", Mr Teo says. Using Flashbang as an example, he says "neon lights are the easiest way to get people's attention and tell a story".

Pop-ups increase brand visibility and can communicate stories in a fun manner. He says: "We believe that malls should be more communal, serve the community and empower the small speciality shops that know their customers well."

In the future, he sees Invade setting up "retail parks" in malls, occupying large spaces for up to three years and housing pop-up retailers.

"That makes landlords more willing to talk. It solves their occupancy problems. And it's fresh content - not the same big players you see everywhere," he says. "It should be communal - not just retailers, but maybe museums, workshops or retail-centric cafes."

Concepts such as Flashbang, if they are innovative and possess the fundamentals of marketing, are "sure to be a win-win during a retail slump", says Dr Malobi Mukherjee, a research fellow at the Institute on Asian Consumer Insight at Nanyang Technological University.

Dr Mukherjee adds: "Such creative approaches are the only way forward in an increasingly turbulent and uncertain retail environment."

The fundamentals that must be in place include innovative offerings and, most importantly, "customers need to be assured of long-term quality and performance of the products", she says.

As for Mox, which houses experiential retail shops on its first floor and workspaces on its upper floors, Dr Mukherjee feels it is "a fine example of the kind of innovative initiatives that will help small or fledgling businesses".

She says: "For small businesses to be resilient, leveraging creative initiatives similar to Mox will give them the platform to test and try out their ideas before scaling up."

Mox member Darcy Li, co-founder of custom printing company Snupped, says new ideas have been incubated just by being in close proximity to other creative businesses.

"When you're in a space with other like-minded people, it's easy to launch collaborations. And things that would usually take at least a month to do can be done in just two weeks."

For Chinese New Year, Snupped will be launching a collaboration project with lifestyle goods designer Teesaurus, which is also located in Mox.

Correction note: An earlier version of this story said Flashbang will be held in partnership with Singapore Tourism Board. This is incorrect. We are sorry for the error.