NYTIMES - Hubert de Givenchy, the French couturier who upheld a standard of quintessentially romantic elegance in fashion for more than four decades, dressing the likes of Jacqueline Kennedy Onassis, Grace Kelly and memorably Audrey Hepburn, in a little black dress, in the movie Breakfast At Tiffany's, died Saturday (March 10) at his home outside Paris. He was 91. Philippe Venet, his longtime companion and a former couture designer, confirmed the death.

Givenchy was emblematic of a generation of gentlemanly designers who established their couture houses in postwar Paris, nurturing personal relationships with customers and creating entire collections with specific women in mind. His very first show - a smash hit with retailers and the press when it was seen in February 1952, when he was just 24 - included the "Bettina blouse," a tribute to his original muse, Bettina Graziani, Paris' leading model of the day, who had joined his fledgling company as director of public relations, saleswoman and fit model.

Shortly thereafter, Givenchy came to the attention of the young Hepburn, a rising star who was so charmed by his youthful designs that she insisted that he make her clothes for nearly all her movies, and help mould her sylphlike image in the process.

In 1961, Hepburn and Givenchy created one of the most indelible cinematic fashion moments of the 20th century in Breakfast At Tiffany's, when her character, Holly Golightly, approaches the titular Fifth Avenue jeweller wearing oversize sunglasses, four strands of sparkling pearls, long evening gloves and a black Givenchy dress - a slender, shoulder-baring column - that looks startlingly out of place for the early morning hour.

For generations of young women dreaming of a glamorous life in the big city, the image of Hepburn as Holly came to represent a certain ideal, that of the rich bohemian throwing wild parties while wearing magnificently gorgeous gowns. 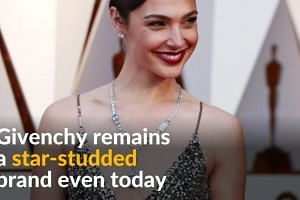 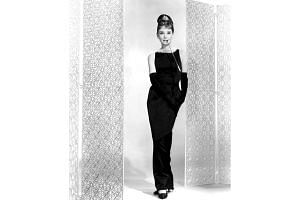 Hepburn also wore Givenchy designs in the movies Funny Face, Love In The Afternoon, Paris When It Sizzles, How To Steal A Million, Charade and Love Among Thieves, and off the screen, too.

But as Givenchy told the story, she was not actually the Hepburn he had hoped to dress when he was told an actress wanted to meet him. Roman Holiday had not yet premiered, so he thought it was Katharine Hepburn calling. Audrey Hepburn was searching for designs that would inspire the character of Sabrina Fairchild, a chauffeur's daughter who is transformed into a sophisticate while studying in Paris in Billy Wilder's film Sabrina (1954).

"She wore tight little pants and a little T-shirt, and I was so disappointed she wasn't Katharine," Givenchy said of the actress, who came before him in ballerina flats and a straw gondolier's hat. "I said I had no time - I was in the middle of making my second collection, and I didn't have too many workers then. But we had dinner that night, and before dinner was over, I told her, 'I'll do anything for you.'"

Around this time he was introduced to his creative idol, Spanish couturier Cristóbal Balenciaga, with whom Givenchy would share an uncommon bond for more than a decade. It was during this period that Givenchy's style transformed from simple and girlish to lavishly embroidered and romantic, with a strict reverence for construction. In 1959, he moved his atelier across the street from Balenciaga's studio on the Avenue George V, and from then on the two enjoyed a creative relationship that produced memorable designs, like the chemise and the sack dress.

A devout Protestant, Givenchy regarded his talents as a gift from God, but in 2007 he told Women's Wear Daily: "Balenciaga was my religion. Since I'm a believer, for me, there's Balenciaga, and the good Lord."

Givenchy was the founding chairman of the Cristóbal Balenciaga Foundation, which opened a museum dedicated to Balenciaga in Getaria, Spain, in 2011.

Since his retirement from fashion in 1995, Givenchy remained active in the arts as an antiques expert for Christie's, the Chateau de Versailles and the Louvre museum. He also managed the French branch of the World Monuments Fund for several years.

He maintained several residences, including an hotel particulier decorated with paintings by Matisse and Picasso in Paris and an exceedingly grand chateau in France, the 16th-century Manoir du Jonchet. Its gardens were designed "as a delicate piece of embroidery," he once said, describing a collaboration with one of his many longtime friends and clients, the American philanthropist Rachel Mellon, known as Bunny. Six feet 6 inches (2 metres) tall, with a shock of sand-coloured hair, chivalrous to a fault, athletic and handsome, Givenchy was the epitome of a French aristocrat.

SON OF A MARQUIS

Count Hubert James Marcel Taffin de Givenchy was born Feb 21, 1927, in Beauvais, France, the younger of two sons of Béatrice Badin, who was known as Sissi, and Lucien Taffin de

Givenchy, the marquis of Givenchy.

His mother's family was well connected with the great tapestry artisans of Beauvais, and his father's had been ennobled in the 18th century. After Lucien died of influenza in 1930, Hubert and his brother, Jean Claude, were brought up by their mother and maternal grandparents. He was introduced to the fine craftsmanship of textiles at an early age. When Hubert was 10, the family visited a Parisian fair, organised by couturier Jeanne Lanvin, which included a display of fashions by Chanel, Elsa Schiaparelli and other designers.

It was a moment that Givenchy later remembered as inspiring his career. "It was always my dream to be a dress designer, and my mother accepted that decision," he recalled during a talk at the Oxford University Union in 2010.

At 17, he left for Paris to study at the Ecole des Beaux-Arts. The next year, through his family's connections, he began an apprenticeship with innovative couturier Jacques Fath. In short order, he went on to work in the studios of Robert Piguet, a Swiss designer known for his rigorous organisation and devotion to classical elegance, in 1946, and Lucien Lelong the same year, after Christian Dior had left that house to establish his own.

But the postwar years of Paris were challenging for couture fashion in Europe, as designers struggled to create a case for expensive decoration in an environment of austerity, as evidenced by the controversy stirred by Dior's introduction of the New Look in 1947.

From 1947 to 1952, Givenchy worked for the eccentric Schiaparelli, dreaming of starting his own house even as leading couturiers, including Edward Molyneux and Piguet, were closing their doors because of the rising costs for luxury fabrics.

The March 3, 1952, issue of Life magazine introduced Givenchy to U.S. audiences in a four-page feature: "De Givenchy, a New Name in Paris." The young designer had planted his flag in a tiny showroom at 8 Rue Alfred de Vigny, heralding a new concept for modern women: separates that were designed to be worn interchangeably, creating multiple outfits from a few key pieces - three tops plus three skirts equals nine outfits.

Givenchy created one of the most recognisable fashion labels in France, with products licensed for children's wear, men's dress shirts, and at one point a Givenchy edition of a Lincoln luxury car.

Critics described Givenchy, with due respect, as dependable for creating tasteful clothes that looked timeless - dramatic capes and shawls, two-piece evening dresses, simple jersey bodices and minimalist tunics in a brilliant array of colours. Designs that were chic and ladylike were the hallmarks of the house.

Givenchy was the rare designer who maintained financial independence for most of his career and also owned his own fragrance business, which was run by his brother, who died in 2009. Hepburn once appeared without payment in an ad campaign for Givenchy's hit scent L'Interdit.

Venet is Givenchy's only immediate survivor. A nephew, James de Givenchy, one of Jean Claude's seven children, is the designer of the New York jewellery collection Taffin. Hubert de Givenchy's wealthy clientele included the Duchess of Windsor, who wore a coat to her husband's funeral that was reportedly created by Givenchy overnight. Jacqueline Onassis, when she was Jacqueline Kennedy, had to publicly renounce French couture during her years as the first lady.

Among many awards, Givenchy received the Chevalier de la Légion d'Honneur in 1983 and a lifetime achievement award from the Council of Fashion Designers of America in 1995. He was chosen for the International Best Dressed List Hall of Fame in 1970.

Givenchy sold his house to the luxury conglomerate LVMH in 1988 and continued to design there until his retirement. Just hours after he presented his final couture collection, in 1995, the company announced his successor would be brash British upstart John Galliano, who moved to Dior a year later and was replaced by another maverick, Alexander McQueen.

In 2005, the label was handed to Italian designer Riccardo Tisci, who introduced an aggressive aesthetic of streetwear printed with gaping sharks and raging Rottweiler graphics in addition to more avant-garde evening wear.

Last March, Clare Waight Keller became the first woman to run the creative side of the

Givenchy house when she was made artistic director, replacing Tisci. Speaking to the Oxford students in 2010, Givenchy gave this piece of advice to the aspiring designers among them: "You must, if it's possible, be born with a kind of elegance. It's part of you, of yourself."