Tough retail climate and lack of support for local labels make it hard to stay in business, they say

SINGAPORE - Local designers have reacted with shock that home-grown fashion label M)phosis, considered one of the most successful here, has closed all its stores in Singapore.

Mr David Wang, 52, chairman of the Textile and Fashion Federation, tells Life: "I was shocked. M)phosis is a beloved local institution. It is like someone telling me BreadTalk or Raffles Hotel is closing."

Mr Alfie Leong, 45, owner of ready-to-wear label BSYM (formally known as mu) and founder of Workshop Element, says: "M)phosis was one of the pioneers and it provided reasonable and trendy clothing, so of course others looked up to it. It was a shock to me."

The brand, founded in 1994, shuttered its last outlet in Singapore on Aug 25 at VivoCity. 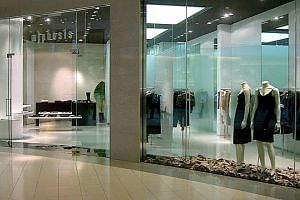 Known for its contemporary designs and clean-cut pieces in basic colours, M)phosis had more than 30 outlets in 11 countries at its peak.

In an interview with The Straits Times earlier in November, the brand's director, Mr Hensley Teh, said the company was facing "a severe cash flow situation" and could not continue even though it wanted to. Its stores in Vietnam, Malaysia, the Philippines and Indonesia - more than 10 of them - are in the process of folding. Its outlets in Dubai, Japan, Australia and Hong Kong shut several years ago, while its stores in China remain open.

While home-grown designers were taken aback by the news, they were not entirely surprised either, given the tough retail climate, with competition from fast-fashion giants and online shopping.

Mr Leong says: "Basically, customers don't care if it has been designed by a local designer or a big fashion house. They care only about the price point or about who else is wearing the clothes."

Mr Wang, who used to run his eponymous fashion label until 2013, says: "If a local designer dress retails  at $250, customers will compare that with Zara, where they can get two dresses for the same amount. Or if they go to H&M, they can even get four or five."

The designer, who has been in the fashion industry for three decades, says he was in Bangkok during the recent Elle Fashion Week. "I was pleasantly surprised and a little jealous that all the guests who turned up were dressed in mostly local Thai labels. They are proud to wear their own designers. This is lacking in Singapore."

"Having a level-one space at a big mall like Suntec is a vantage point to shout out and say, hey, Asian and Singaporean designers have what it takes," he says.

"Creativity is very important, but it does not equate to dollars and cents," he adds.

Mr Wang says that for designers here to win over local shoppers, they need to find a niche.

"We cannot fight in terms of prices or fabrics. So it really boils down to having a unique fashion DNA," he says.

He cites the example of Ong Shunmugam, which has carved out a niche with its "East-meets-West designs, small quantities and exotic fabrics"; and Frederick Lee, whom he describes as "the go-to name if you are looking for over-the-top, one-of-a-kind gowns".

Indeed, while the odds may appear stacked against them, it is not all gloom and doom for Singaporean brands, says Mr Sven Tan, co-founder and co-designer of local label In Good Company.

On how its first standalone store at Ion Orchard, which opened in August, is doing, he says: "We're feeling great about the sales figures and our customers' response."

Another successful home-grown brand that has been around for close to two decades is ready-to-wear label GG<5, which was launched in 1997 and has 12 outlets in Singapore. The brand declined to comment for this story.

Mr Tan adds that while the closure of M)phosis saddens him, it also reminds him that there is no formula to being successful.

"It's a tough climate, but it's business and customers know what they want," he says.