NEW YORK (Reuters) - Celebrities and the elite unleashed tech-themed haute couture at the Met Gala on Monday night in New York, lighting up the Twittersphere much like a dress worn by Claire Danes.

Danes caused an early flurry on social media wearing a Zac Posen dress, similar to Cinderella's ball gown, which was illuminated from underneath as she walked the red carpet. 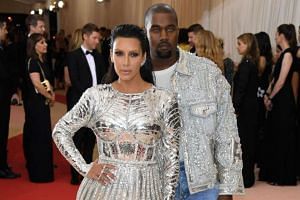 Pop singer and co-chair of the Gala, Taylor Swift, however appeared to win the night. True to the Manus X Machina: Fashion In An Age Of Technology theme for this year's Costume Institute exhibition, "Tay Tay" shimmered in a silver Louis Vuitton gown, black lace-up heels and boldly dark lipstick.

"Am I crazy? I like how Taylor Swift looks? I think it's editorial. #MetGala," wrote editorial director of Paper Magazine Mickey Boardman (@AskMrMickeyv).

Others did not take as well to Swift's selection. Fashion blogger Bryanboy (@bryanboy) quipped, "Taylor Swift had the worst shoes I swear."

Kanye West and Kim Kardashian showed up to the ball "twinning" in Balmain, prompting the fashion company to go viral on Twitter with many users expressing their "over-it" feelings toward the line.

Mother-to-be and Scandal star Kerry Washington rocked a black lace Marc Jacobs dress with a new do - purple hair - while Lady Gaga strutted the red carpet in a Versace one-piece.

Beyonce, who has dominated the Met Gala red carpet in recent years, wore a Givenchy gown. The singer tops dress searches at the gala on Google from 2004 to present, according to GoogleTrends (@GoogleTrends).

Anna Wintour, the American Vogue editor-in-chief and organizer of the star-studded event, was the first to arrive at the Met's annual fund-raising ball.

Paparazzi snapped photos of her white-fringed Chanel dress alongside her daughter, Bee Shaffer, who wore a custom gown by Alexander McQueen.

The hashtag #MetGala was top trending in the United States on all of Monday with more than 1 million total mentions.