When Ms Chuah Khai Lin and Ms Evelyn Toh started breastfeeding their babies five years ago, they became more conscious of what they were eating.

Says Ms Toh, 38, whose daughter, an only child, is now five: "We wanted to eat food that was nutritious and free of chemicals so that we wouldn't pass anything harmful to our kids."

They have known each other since they were mass communication students at Ngee Ann Polytechnic and became interested in where their food came from and how to grow them.

But the two, who live in HDB flats, did not know where to start.

Says Ms Toh: "I thought you could grow vegetables only if you have enough land."

Then last year, while pitching for a branding project for Bugis Cube, Ms Chuah, 38, who was then working as a freelance art director, and Ms Toh, who was running her own branding and design consultancy, learnt that a 5,800 sq ft space on the rooftop of the shopping mall was available for rent.

Coincidentally, at around the same time, they met Mr James Lam, who founded UGrowGardens in 2013. The consultancy helps people build and maintain food gardens. Mr Lam, 55, has developed several systems of growing high volumes of vegetables in limited space in the backyard of his parents' house and was looking for a bigger plot to display them. 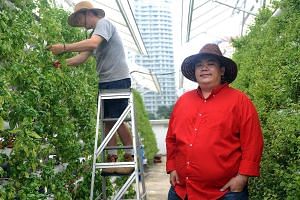 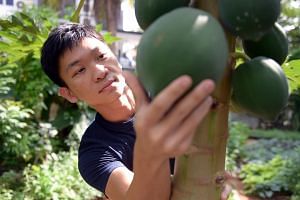 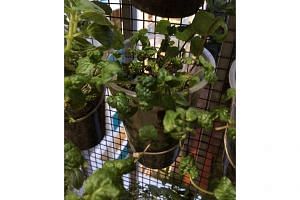 The three decided to work together.

Says Ms Chuah: "It would be a symbiotic relationship. Evelyn and I would pay the rent and get to do a lot of hands-on learning while UGrowGardens could use our space to upgrade existing vertical growing systems and also test prototypes of new systems which we will also help develop."

The women decided that their main sources of revenue would come from developing starter kits and running workshops on how to grow edibles.

Says Ms Chuah: "We felt there would be a demand because people are more concerned about eating healthily these days, and growing your own food is a way to do so because you won't be adding chemicals to what you grow."

So even though the two were nervous about the viability of their business, they signed on the dotted line last August, got the space on a five-year lease and started their company, G.R.E.E.N.S. (short for Grow, Reap, Eat, Educate, Nurture and Share).

They invested about $8,000 to $10,000 in all on growing supplies such as fertilisers, seeds and peat, and depended on recycled materials such as pots and trays to hold their plants. They decline to reveal their monthly rental, but industry sources put it at a four-figure sum.

Their husbands have been supportive, turning up on weekends to help them. Ms Chuah's husband, a former loyalty marketing director, is in between jobs while Ms Toh's husband is an IT manager.

It has been a lot of hard physical work, say the women.

When they are not out on the rooftop in their hats, they would be out visiting farms with Mr Lam at places such as Kranji and Lim Chu Kang to learn from other farmers.

The most challenging part so far has been dealing with the heat and wind on the rooftop. Says Ms Chuah: "The plants need to be watered every few hours. It is very tiring."

It is not uncommon for up to 40 per cent of seedlings to die due to the heat and wind. They are in the midst of installing an irrigation system for the plants and building a nursery for their seedlings.

When their plants do not do well, they would take them home to nurse them back to health. They now have their own herbs growing along the corridor outside their flats or hung in pots on window grilles. By October last year, they had learnt enough to give talks and run workshops. The following month, they had developed their own starter kits for growing herbs, vegetables and microgreens.

The kits contain all you need to start growing edibles such as lemon basil and arugula, and includes seeds, soil and pot.

Says Ms Chuah: "We keep our prices affordable because we believe that healthy eating should not be only for the rich."

Although they are still in the red, they say it has been a fulfilling journey. Plus, they no longer buy herbs such as basil and coriander, but use what they grow instead. Ms Toh also grows spinach and chye sim.

Says Ms Chuah: "We are definitely making a ripple. When someone tells us that he has used our starter kits to grow and harvest his plants, we feel satisfaction."

They also plan to sell the vegetables they harvest from their rooftop garden. They now specialise in microgreens and herbs such as chocolate mint and cinnamon basil, which are not widely sold here, and sell them to eateries nearby.

Although the women, who are in this full-time, have given themselves a year to break even, they will persist even if they do not.

Says Ms Chuah, who has two sons aged five and three: "We believe in what we are doing. We have no backup plans."

A version of this story appeared in the April 2015 issue of The Life e-magazine in The Straits Times Star E-books app, with the headline "Rooftop farmers".