Nominated nine times without a win, theatre director Tracie Pang did not expect to be 10th time lucky at yesterday's M1-The Straits Times Life Theatre Awards. She won the Best Director award for the family drama Falling and confessed, holding her trophy, that she had not prepared a speech.

"I'm thankful to have won for this particular show because it meant so much to so many people," said the 49-year-old. She also thanked her husband, actor Adrian Pang, with whom she runs the Pangdemonium theatre company.

Staged by Pangdemonium, Falling is about a family trying and failing to cope with autism. Cast member Andrew Marko won Best Actor for his portrayal of an autistic young man, while veteran actress Tan Kheng Hua, who played his mother, won Best Actress at yesterday's ceremony at the Esplanade Recital Studio.

It was 25-year-old Marko's first nomination and first win. He dedicated it to all families struggling with autism, an issue many are afraid to talk about.

Falling also won the Readers Choice award for Production Of The Year, netting the most votes in an online poll where readers could lobby for their favourite show of the previous year. 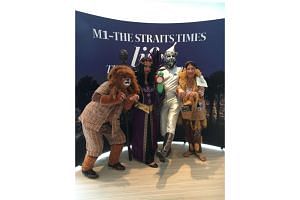 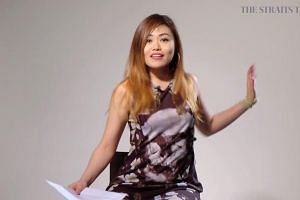 The critic's favourite was B*tch: The Origin Of The Female Species, a two-hander about a man and his dog, which won Production of the Year. This is the top award given out at the annual ceremony to recognise the best of Singapore theatre in the previous year.

Writer-director Edith Podesta also took home the Best Original Script award for B*tch: The Origin Of The Female Species, staged during last year's M1 Singapore Fringe Festival. Podesta, 37, was overwhelmed because the play was the first she had staged as a freelance artist. She left a full-time job as an educator at Lasalle College of the Arts to focus on her theatre work.

She said the recognition would help with future projects. "Audiences are more comfortable coming in for works once they've read in the papers that this person won an award."

The annual theatre awards were started by The Straits Times Life section in 2001. Telco M1 was on board this year for the third time as title sponsor. The awards are also organised in collaboration with the Esplanade - Theatres On The Bay as venue sponsor.

There was also a prize for the best-dressed person at the ceremony. Several in the 200-strong audience came dressed as characters from their favourite musicals, in keeping with the afternoon's theme, Lah Lah Land, a nod to the bountiful crop of musicals on the Singapore stage this year.

The Best Dressed prize went to actor Dwayne Lau, who turned up in a yellow dress as Emma Stone from the movie La La Land. The prize sponsored by M Social was a dinner voucher for 2 persons worth $200, to be used at the hotel's Beast & Butterflies restaurant.

Fifteen awards were given out yesterday. Most were judged by a panel of five comprising an arts educator and arts reviewers from the Singapore Press Holdings stable of newspapers.

An award for children's theatre, Best Production for the Young, was judged by a separate panel of five, including arts educators and journalists. This award has been organised with the National Arts Council since last year. It was won by The Magic Lantern, a folktale told through puppets and staged by Paper Monkey Theatre and the Esplanade.

Paper Monkey Theatre's founder Benjamin Ho, 49, said he wished his late parents could have been present to see him win this award. A puppeteer with several decades of experience, he worked hard to convince his family, including his six siblings, that his career choice was respectable.

"My father once asked me when I was going to grow up," he said, holding his trophy. "This award would prove to them that I don't just play with dolls. I do serious children's work."

Video: "Emma Stone" and other winners at the awards http://str.sg/4XdG

Photos: What they wore  http://str.sg/4XdS

Production Of The Year

Production Of The Year (Readers' Choice):

Best Production For The Young

Loo Zihan for Manifesto (Drama Box and The Necessary Stage)

Max Tan and Yuan Zhiying of MAX.TAN for Manifesto (Drama Box and The Necessary Stage)

Correction note: In our earlier story, we said the Best Dressed prize, sponsored by M Social,  was a dinner voucher for 2 persons worth $300, to be used at the hotel's Beast & Butterflies restaurant. This is incorrect. It should be $200. We are sorry for the error.