Popular home-grown YouTube channel Night Owl Cinematics (NOC) has put its work with Dee Kosh "on hold indefinitely" in the wake of sexual harassment allegations against the deejay and YouTuber.

In a statement released on Wednesday, NOC - which has a million subscribers - said it had received a request from Dee Kosh's management "for him to be released of any professional service engagement with us".

NOC said: "We can confirm that he has no outstanding or ongoing projects with NOC at present. All further collaborations with Dee Kosh have been put on hold indefinitely."

The 32-year-old, whose real name is Darryl Ian Koshy, has been accused of soliciting nude pictures and offering money to minors in return for sexual favours, among other things. Several police reports have been filed and police investigations are ongoing.

Koshy's work with the channel mostly centred on food reviews in its Food King series, with the last being a National Day video released on Aug 9.

Koshy has also been removed from NOC's About Us page, where he was previously listed as a partner/actor/host. NOC said he had been engaged on a freelance basis for its Food King programme.

It added that it had initiated a company-wide investigation involving 37 crew and 24 talents, and concluded that Dee Kosh had not made sexual advances towards any of its staff members.

On Monday, Koshy posted an apology on Instagram, saying: "I now admit that there is truth to some of the things which are being said now, and I am sorry to the people I have hurt in the process."

In this, he backtracked on an earlier statement denying he had had sexual relations with a minor, and saying he would take "necessary steps to clear this all up".

Meanwhile, two talents under Koshy's management - who also appeared on his YouTube channel of 380,000 followers - released statements to address the backlash against them and clarify their dealings with Koshy were professional.

YouTuber Ben Tang, who counts Koshy as "friend, mentor and manager", wrote on Instagram on Wednesday he was disappointed and did not condone his actions. 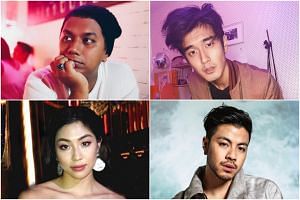 Tang said he has also been on the receiving end of abusive comments, direct messages and insults aimed at his family and personal life. "Now I understand that most of you are angry and frustrated...but there is no need to be unreasonable and target your hate at the rest of the talents and I," he wrote.

Photos have also been circulating of Tang and Koshy dressed as a female character called Xiaotina, in "various stages of staged intimacy". Tang clarified that the pictures were part of a "fictional narrative in an ongoing plot involving Xiaotina" and were staged, photoshopped and "not forced upon him".

He also denied having had a sexual relationship with Koshy. "Everything has been strictly professional since we started working together five years ago," he said.

Another talent under Koshy's management, Hamza Zaidi, also released a statement on Wednesday saying he had never received any sexual advances from Koshy.

"All of the boys and I were approached by Dee Kosh on Instagram and after getting to know us, he would sign us if he felt we were a good fit for the channel. Everything work-related was extremely professional," said Hamza.

Several firms that Dee Kosh previously worked with, including Huawei, Foodpanda and Lenovo, said their engagements with him had ended and there were no ongoing or future projects planned. Power 98 FM, where he hosts weekday night shows, said on Monday that he is on leave and that the station "does not tolerate any form of harassment".