Boyish looks aside, Tony Leung Chiu Wai is still in touch with his inner child at 55

Tony Leung Chiu Wai memorably talked to towels and bars of soaps as the lonely Cop 663 in the 1994 romance Chungking Express. But for his new movie, Monster Hunt 2, the award-winning actor had to do something tougher: talk to air in scenes that would be fleshed out with computer-animated creatures only later.

In a brief interview in a restaurant in Wan Chai, Leung, a remarkably boyish 55, talked about making funny movies, being in touch with his inner child and why he rarely plays fathers.

You have been taking a break from dramas to make comedies, starting with See You Tomorrow in 2016. So how was your break on the set of Monster Hunt 2?

I remember doing overnight shoots for the first two weeks. It was December, Christmas time. It was minus-10 to minus-20 deg C every night and the shoot was in the streets. Wah, I was freezing. As a southerner, I'm not used to that kind of cold northern weather. That was hard.

Other than that, it was a happy shoot for all of us. Because the director is so nice, a good person. I think he's a kind, child-like person.

There is a saying that "dying is easy, comedy is hard". Was being funny hard for you?

It's difficult. I have to find it funny because I don't know what other people's standards are. Sometimes, in a scene in a drama, when I make myself shed tears, those are my feelings. I think if your feelings are true, the audience will feel them. So when it's comedy, at least you have to find it funny first.

I like inspirational comedies. When I was young - I don't know if you've seen it - in the 1970s there was a Japanese drama called Oretachi No Tabi (Our Trip), about three young men. After seeing it, you'll feel, "There's hope! Work hard!" 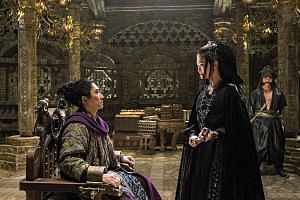 I don't know. I've always had this innocence. I'm lucky. Because you get older and lose your innocence. I think I've it. I've been able to keep it. Always be curious about everything and interested in everything.

Is it why you have rarely played fathers, much less grandfathers, in your movies though?

Someone asked me to, but I always think fate decides the making of a movie. It wasn't necessarily that I resisted that role, but that I wasn't interested in the entire project.

I suddenly couldn't be bothered to take care of my hair, so I shaved it off.

You now look like the monk you played in Chinese Ghost Story III, the 1991 fantasy comedy you made in the golden age of Hong Kong cinema. But for a decade now, you have starred mostly in China-Hong Kong co-productions. Do you miss making a Hong Kong movie?

In fact, I just finished one called Theory Of Ambitions, which can be considered a Hong Kong production. Why did I shoot it? Because I like that new director (Philip Yung). As a Hong Kong actor, I have a sense of mission. (The movie) is about the 1950s, it goes all the way to the 1990s, it's about corrupt police officers in Hong Kong. Although I hadn't been born yet in the 1950s, I've experienced the 1960s to the 1990s. The colour of the 1960s, the light, the smell, the clothing - I know all that.

A while ago, I had done See You Tomorrow, then Europe Raiders, then Monster Hunt 2, and I didn't want to make another movie. But I thought that as a Hong Kong actor, if I didn't make this, would you have to find an actor from elsewhere? So I thought, "Make one more lah."