Full-time national serviceman Lim "Lysander" Lyn-Feng's foray into esports commentary started two years ago as a "lucky coincidence" after he and his friends were eliminated from a local amateur video gaming contest.

At the venue, there was another "casting" competition, where games commentators were duking it out to be the brightest, wittiest and most knowledgeable speakers. When done well, these commentaries can bring the games to life.

"So I just gabbed into the mike and talked off the cuff as the matches were going on," recalls the former Ngee Ann Polytechnic communications major, 22.

Lim won the contest and was eventually recruited to join Beyond the Summit, a major online esports channel with a 125,000-strong following. 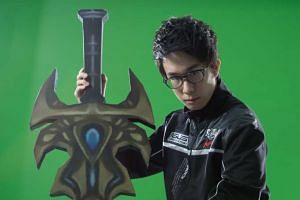 He is tight-lipped about his exact income and is only willing to say that he gets paid per cast and his hourly rate is more than $10.

The business of esports commentary is no less lucrative than gaming.

This makes him the most highly subscribed user on the video platform, ahead of One Direction and Rihanna.

Lim says his parents are behind his choice of career.

"My father supports gaming as he feels that it builds strategic thinking. He even helped set up my equipment," he says.

His father runs an investment business, while his mother works in the IT industry. He has two younger brothers - Lyn-Yang, 20, who is awaiting national service enlistment, and Lyn-Zhou, 12.

"My role is to help the viewer better appreciate what's going on in the game as opposed to just watching it. It's like having a knowledgeable friend talk you through a soccer match," he explains.

The normally reticent Lim morphs into a livewire online, speaking in rapid-fire bursts of Singaporean-inflected English.

Unlike other analysts who try to dissect the goings-on, he is guided more by the game's ebb and flow, peppering his narration with song lyrics or puns.

This free-wheeling style has garnered him both fans and detractors. Fellow commentator David "Godz" Parker, 25, says of Lim: "He has a brand of humour and style different from what was expected but it drew the community to him. But sometimes he loses focus on the game as he is distracted by feedback."

Online forum Reddit user Shawn Bradley wrote: "Sometimes what he says is gold, but (sometimes he is) cringe-worthy."

But another user, sexymunyi, says he is "easily the best at improvisation and has a happy energy so you feel compelled to watch".

Lim, who aspires to be an event host in the esports industry some day, says he has become used to both types of feedback.

He says: "I was guilty of finding ways to please my haters in the past. But in the end, they're a vocal minority. I've learnt that to be an online personality, you have to have very thick skin. "