TOKYO (NYTimes) - Even the restrooms are covered in polka dots.

Yayoi Kusama, the celebrated Japanese artist whose compulsively repetitive images have drawn huge crowds and critical acclaim around the world, is opening a museum in Tokyo that could only be hers. The unmistakable touches include large red polka dots and mirrors in the elevators and a bulbous mosaic pumpkin sculpture on the top floor.

"Until now, I was the one who went overseas," Kusama, 88, said, sitting in a wheelchair in front of her painting I Who Have Arrived In The Universe at a media preview of the Yayoi Kusama Museum on Tuesday. "But I now recognise that there are more people coming to Japan to come to see my work," she said, reading from a statement in a binder covered in - what else? - red polka dots. "And that is why I decided to establish a place for them to see my work."

Kusama, who lived and worked in New York for 16 years at the beginning of her career and was friends with artists Frank Stella, Donald Judd and Joseph Cornell, with whom she had a relationship, has had retrospectives at the Whitney Museum in New York and the Tate Museum in London.

The museum dedicated to her work, operated by a foundation she created to support the display of her paintings and immersive installations even after her death, officially opens on Sunday. Tickets for timed entry slots went on sale online last month and are already sold out through November.

In an effort to limit crowds in the new Tokyo museum, only 50 visitors will be admitted at a time for one of four 90-minute slots per day.

The building, designed by the architectural firm Kume Sekkei, stands five stories high in Shinjuku, a residential neighbourhood close to Kusama's studio and the psychiatric hospital where she has lived voluntarily since 1977.

Designed as five large cubes stacked on top of one another, the museum features galleries with high ceilings, pristine white walls and curved corners. White polka dots are stenciled onto glass panels lining the front of the building. Museum staff declined to say how much it had cost to build.

Kusama selected all of the art that appears in the inaugural exhibition, Creation Is A Solitary Pursuit, Love Is What Brings You Closer To Art, which includes mostly recent work and runs until Feb 25. Exhibitions will be rotated every six months.

"It will probably be a mecca for Kusama," said Yasuaki Ishizaka, the former head of Sotheby's in Japan and now an art adviser. "She is one of the first Japanese - the only Japanese perhaps - who has a really popular worldwide following, whether it's Asia, Europe or the States or whether it's with elderly or younger people."

Kusama said she creates her works during a process of obsessive concentration and hallucinations. In 2014, one of her works, White No. 28, sold for US$7.1 million, with premium, at Christie's.

The new exhibition includes 45 pieces, 16 of which are part of the series My Eternal Soul - large, electric-coloured acrylic paintings that Kusama has been working on since 2009 and that were exhibited at the National Art Centre in Tokyo earlier this year.

Kusama has continued to work on the series, producing a painting every day or two; four works that have never been shown in public before are displayed in a large open room on the museum's third floor.

One of her signature mirror-lined rooms, with rows of yellow and black pumpkins reflected into infinity, is installed on the fourth floor. A large gold and pink mosaic-tiled pumpkin sculpture sits in a room on the top floor overlooking a vista of apartment blocks, with the laundry drying on the balconies across the street offering a prosaic backdrop to Kusama's mesmerising work.

Summing up her philosophy of art, Kusama said, "I hope that you will continue to understand my spirit and that this is for the benefit of world peace and love."

In an interview in her studio after the media preview, Kusama, dressed in a yellow and black polka-dot print caftan, a fiery red wig and a streak of red paint splashed on her right shoe, continued the theme of world peace.

Although she did not address specific current events like the nuclear crisis in North Korea, she said she wanted her art to contribute to "happiness for human beings and a world without war". Kusama, who was born in 1929 in the mountain town of Matsumoto, began painting from hallucinations she experienced as a young girl. Some of her anti-war sentiments stem from the fact that she lived through World War II in Japan, going to work at a military factory to sew parachutes when she was just 13 years old. 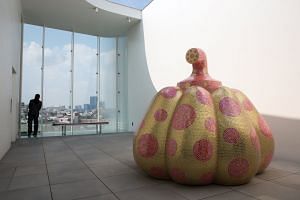 In Pictures: Sneak preview of Yayoi Kusama's museum in Tokyo 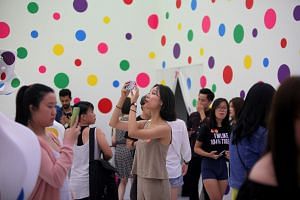 She was abused by her mother and has spoken openly about her mental neuroses. In an interview with Tamaki Saito, a Japanese psychiatrist, in his 2008 book, Artists Dance On The Borderline, she recalled that she had undergone six years of Freudian analysis in New York but that the treatment had stymied her creativity.

"Ideas stopped coming out no matter what I painted or drew," she said, "because everything was coming out of my mouth."

Asked at her studio about the relationship between her psychiatric condition and her art, her handlers suggested the question was "too sensitive". But Kusama insisted on answering. "Since I was 10 years old I have been painting every day," she said. "And even now there is not a day that I do not paint." She added, "I still see polka dots everywhere."

Her goal, she said, sitting in front of two new works in her studio, is to keep going. "I am just trying to struggle, always," she said. "Art is everything for me and I have been struggling for art." She said she frequently hears from museums around the world wanting to stage exhibitions of her work. "I am just trying to concentrate on painting," she said.

An assistant rolled her back to a table where a large sky-blue canvas rested. Kusama picked up a small brush from a dish of black acrylic paint, and carried on painting columns of catlike eyes that she had started that morning.