The biggest praise for Cafe Society came for performances by Twilight megastar turned indie darling Kristen Stewart and Jesse Eisenberg of The Social Network fame, who are set to walk the red carpet on Wednesday night in one of the starriest Cannes of recent times.

Shot in dreamy technicolor hues, Allen's latest movie highlights what one critic called "the selfishness of being happy" as Stewart and Eisenberg voyage through infidelity and heartbreak from 1930s Hollywood to bohemian New York.

The film follows Bobby (Eisenberg) as he heads to Hollywood to score a job with his big-shot agent uncle Phil - played by Steve Carell - and falls in love with his winsome secretary and mistress Vonnie (Stewart).

After much wavering from all characters, Vonnie chooses the rich uncle and a heartbroken Bobby returns to New York where he works for his gangster brother, prone to killing off his enemies and burying them in cement, and marries a divorcee played by Blake Lively.

Vonnie later makes her way to a New York where, to a backdrop of jazz and gorgeous period dress, she lures Bobby back into her arms.

A spate of self-deprecating jokes steeped in Allen's Jewish heritage drew the most laughs from the audience, but critics complained that the film lacked depth.

Allen told reporters he wanted the film, which he narrated, to have "the scope of a novel that took place over a period of time, with a number of different incidents".

The director said that Stewart, set for a stellar Cannes where she will also appear in competition film Personal Shopper, had been perfect for the role. 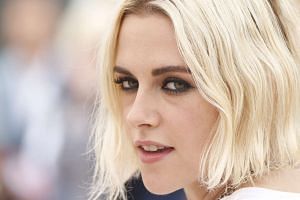 "I needed somebody who could play an adorable little secretary from Nebraska - this sweet little girl just as cute as a button - and later in the movie you could see her in furs and jewels and she would be... completely believable," he said.

Stewart, sporting a sharp bleach blonde bob and dressed all in white, is known more for her edginess than cuteness and looked amused at the description.

"I auditioned for this part. I really had to prove myself because I don't know if that lovely little lady was something he saw immediately," she said.

Her co-star Eisenberg was left red-faced when a reporter revealed he had written a script about Woody Allen when he was a teenager.

"And it looks like now this might be the end of this," he said, looking sheepishly at Allen, to laughter.

Allen's movie kicks off 12 heady and exhausting days of films, networking and partying in Cannes, as the population of the French Riviera town is set to nearly triple to some 200,000 people.

Before his film premiered, the Hollywood veteran admitted that the terror threat was playing on his mind. "I'm hypochondriacal when it comes to terrorism," Allen told Variety, "the world's biggest worrywart."

Hundreds of extra police officers have been deployed, with daily bomb sweeps of the main venue and long queues at checks to get inside.

Festival director Thierry Fremaux told AFP that despite the terror threat which prompted the French interior minister to visit the town Monday, this would be a "normal year I dare to say", and that it was important that Cannes "is there to defend (global) cinema".

Nearly 90 feature films from all over the world will be shown in this year's official selection, including 21 which are in the running for the Palme d'Or main prize.