Apple Chan, a newcomer to the predominantly male cast of Ah Boys To Men, has had to face sexist comments, but she takes them in her stride

In the new Ah Boys To Men comedy, a commander yells in frustration at a group of reservists walking too slowly for his liking: "My grandmother can move faster than you!"

The civilian-soldiers are sluggish because they resent the burden of in-camp training (ICT). One of them yells back: "Then you ask your grandmother to come serve ICT lah!"

Surprisingly, that act of insubordination goes unpunished. In the Ah Boys films, disrespect is almost always followed by a scolding, if not worse.

But as The Straits Times learns from the cast members - Apple Chan, Noah Yap, Joshua Tan and Tosh Zhang - viewers had better get used to seeing NSmen behaving badly and getting away with it.

Musician-actor Zhang, 28, who plays Sergeant Ong in the new movie, says: "It shines a different light; it's a 180-degree turn." 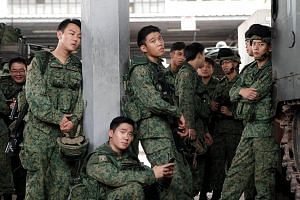 "In the third movie especially, when we were naval divers, we were all very garang," he adds, using the Malay word for fierce, which has become part of Singapore Armed Forces (SAF) slang.

The new film touches on a little-seen aspect of military culture in Singapore: How quickly behaviours such as moving sharply and fast, marching and speaking respectfully to senior ranks disappear after the men leave full-time national service.

"Now we come back very lepak," he says, using the slang term for relaxed.

While his character of Sergeant Ong still follows the rulebook, the men he commands have abandoned it.

As the film shows, commanders give leeway because they have sympathy for the men who have to put their jobs and family lives on hold for ICT.

Zhang says the film's theme of give-and-take between trainers and trainees has a "realness", while castmate Tan, 27, who plays soldier Ken Chow, says that "we are actually showing what's going on and pushing the limits".

"It would be so easy to show everyone falling in and marching, but everyone knows what reservist life is actually like," he says.

In real life Tan, Zhang and Yap have completed national service and are NSmen.

All three comedies were highly successful at the box office, each becoming that year's highest-grossing Singapore film. In total, the films have earned more than $18 million in ticket sales.

Director and co-writer Jack Neo had said that he believed in sequels only if he had something new to say, the actors point out.

And in the new instalment, actress Apple Chan is yet another new element.

The 28-year-old plays an armour officer, Lieutenant Zhang, a woman forced to fight the sexist attitudes of the NSmen under her command.

But on social media, the Hong Kong-born, Singapore-raised actress, who is a Singapore permanent resident, has had to battle yet more sexism.

On the film's Facebook page and in a previous Straits Times post that featured her picture in an SAF uniform, some commenters have either scoffed at the idea of women in the military, or talked about her body in a sexual manner.

"They say I don't look like a 'ma'am'," she says, referring to how commenters say she looks too feminine to be a female officer, who are called "ma'am".

"I can't expect everyone to like or accept me. I expected that reaction because I am the only girl here... I've been in this industry for six years, this is not new to me," she says.

The actress disagrees with those who say that women officers tend to be unattractively masculine.

"When we were filming, we saw a lot of female officers and they look feminine. They look like the girl next door, but few people can understand that and that's why they made those comments about me," she says.

Trolls also targeted her for playing an SAF officer when she is not a Singaporean, a brickbat that Tan, who spent the early part of his life in Australia, faced in the early days of the Ah Boys franchise.

Tan thinks she caught more online flak than he did, which shows just how bad it can get for women online, he says.

Actor Yap, 23, has played the character of I.P. Man since the first Ah Boys movie. Last year, it looked like the third movie was going to be his last.

A full-time national serviceman at the time, he was sentenced to nine months in the detention barracks for the consumption of cannabis.

"I want to move forward," he says.

Everyone deserves a second chance, adds Yap, who is also known for his YouTube show which features appearances from local celebrities.

He is grateful that the entertainment industry here kept its doors open to him and hopes that the public will do the same.

"If people judge me, I don't blame them. I thank God and I thank Jack for giving me this chance.

"Every day is a blessing," he says.