NEW YORK (NYTimes) - The bare truth is this: The scantily clad Victoria's Secret fashion show drew only 3.3 million TV viewers in the United States last year, down from 9.7 million in 2013.

No wonder then that the annual spectacle of glitter, cleavage and pop music will no longer air on network television after a nearly two-decade run.

The announcement was made in a memo from Mr Leslie Wexner, chief executive of Victoria's Secret's parent company, L Brands. He said the company had taken a "fresh look at every aspect of our business" in the past few months, and noted that the brand "must evolve... to grow".

"With that in mind, we have decided to re-think the traditional Victoria's Secret Fashion Show," he wrote. "Going forward, we don't believe network television is the right fit." The company will develop "a new kind of event" on different platforms.

The decision comes as Victoria's Secret, the largest lingerie company in the US, works to revamp its image and as interest in the once-major TV event has plummeted.

The show first aired in 2001 with an hour-long special on ABC. It attracted millions of viewers who tuned in to watch supermodels strut on runways in high heels, crystal-encrusted lingerie and massive wings, with musical performances from stars like Taylor Swift, Spice Girls and Lady Gaga.

Some slammed the show for objectifying women. But many viewed it as marketing genius - a commercial for the Victoria's Secret brand packaged as a prime-time special. 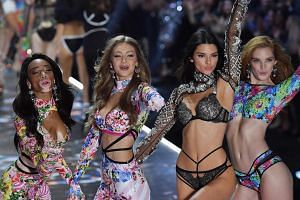 But those days are long gone. Viewership for the show dropped by roughly two-thirds in five years.

The event attracted unwanted attention last year, when Mr Edward Razek, chief marketing officer of L Brands, came under fire for comments he made about casting plus-size and transgender models.

"Shouldn't you have transsexuals in the show?

"No. No, I don't think we should. Well, why not? Because the show is a fantasy.

"It's a 42-minute entertainment special."