The story: Based on the Marvel Comics anti-hero of the same name, Venom is an alien symbiotic lifeform that finds an excellent human host in journalist Eddie Brock (Tom Hardy). As Brock attempts to come to terms with his strange new existence, he tries to take down corporate chief Carlton Drake (Riz Ahmed), whose laboratories have been carrying out fatal human trials with similar alien symbiotes.

This mess of an origin story does not deserve the brilliance that is Tom Hardy.

The talented British actor is the only reason the film is worth any viewing time because as soon as he goes into the Eddie/Venom split-personality mode, he is fascinating to watch.

He certainly looks like he worked really hard for the double role, sweating and contorting his face and body in all manner of ways, and voicing the angry, gravelly sounding Venom with much enthusiasm.

But all of his efforts are squandered when the film has so much trouble deciding what it wants to do.

Is it meant to be fun and light in the vein of other family-friendly Marvel offerings such as Ant-Man (2015) or Guardians Of The Galaxy (2014)? Or does it hope to be bloody and comically rude the way Deadpool (2016) is?

This movie ends up being neither - coming across instead like an annoying child trying too hard to act like an adult.

Had it gone the Deadpool R-rated route, the film would have likely worked better because the character of Venom is supposed to be absolutely creepy and nightmarish. 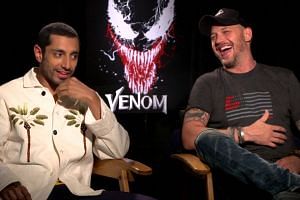 After all, this is a strange alien form who haunts Eddie's mind and harbours an insatiable appetite for human flesh.

So whenever Venom threatens to chew off his victims' "eyes, lungs, pancreas" - "so many snacks, so little time", he snarls - audiences expect to see it all happen in full-fledged gory fashion.

But all they get are cheap off-camera shots and weak screams from bystanders to know that anything happened.

So, it appears only poor Hardy tried to make this film work at all.