His on-screen persona might wield a mighty hammer and possess the power to unleash lightning bolts, but Australian actor Chris Hemsworth was in need of a real-life hero when he recently lost his wallet in a Los Angeles restaurant.

But Hemsworth, who was in Singapore recently for the Asian premier of his film The Huntsman: Winter's War, had not counted on teenager Tristin Budzyn-Baker coming to the rescue of the God of Thunder.

Budzyn-Baker, 17, had made the surprise discovery with his mother and was shocked to find out who it belonged to.

"We found Thor's wallet," he recounted while sitting next to Hemsworth on the show.

He then wrote a letter to Hemsworth's management and sneaked in a request for tickets to the show, which the actor had been due to appear on. 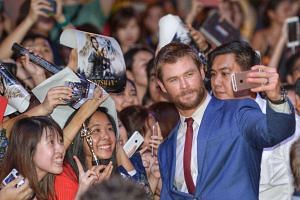 In Pictures: The Huntsman: Winter's War Asia premiere in Singapore

Seated in the audience as Hemsworth related the story, Budzyn-Baker later joined Hemsworth and host DeGeneres on stage.

"I expected it was going to be empty, and all the cash was in there," a grateful Hemsworth said, before handing the teenager a wad of cash from his wallet.

Hemsworth also wrote a letter of recommendation for Budzyn-Baker, a boy scout, to earn the Eagle Scout award.

But the rewards did not end there.

Not bad at all for returning the wallet of a superhero.