Rock band U2 has decided to delay the release of its new album due to the surprise election of Donald Trump as US president, according to reports.

Speaking with Rolling Stone, guitarist The Edge - real name David Evans - said the band was placing the album’s release on hold and taking some “breathing space” to consider what it wants to say following Trump’s ascension to the White House.

They plan to reconsider certain songs in the wake of a Trump presidency, reported the Guardian.

“We just went, ‘Hold on a second – we’ve got to give ourselves a moment to think about this record and about how it relates to what’s going on in the world,’” the guitarist said.

The 40-year-old Irish group had been set to release its 14th studio album, Songs Of Experience, which The Edge said was completed towards the end of last year. He explained that most of it was was written in early 2016 or before then.

“Now, as I think you’d agree, the world is a different place,” he said.

"It's like a pendulum has suddenly just taken a huge swing in the other direction."

The guitarist pointed out that the group's fifth album, The Joshua Tree, which turns 30 years old this year, was released during the Reagan-Thatcher era of British and American politics, another politically tumultuous time. 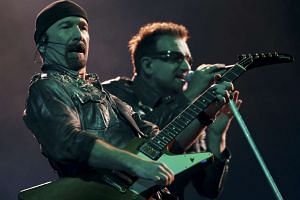 "It feels like we're right back there in a way. I don't think any of our work has ever come full circle to that extent," he reflected.

"It just felt like, 'Wow, these songs have a new meaning and a new resonance today that they didn't have three years ago, four years ago.'"

"We're happy to take this moment to regroup and think about an album that's so many years old, but still seems relevant," the Edge said.

The group have made their views on Trump known, said the Guardian. At the iHeartRadio music festival in September, Bono used lyrics from their song Desire to make pointed remarks about the then presidential nominee. He also told a virtual Trump, “You’re fired,” at an October benefit concert.

Speaking to US talk show host Charlie Rose in September, Bono said that Trump is “trying to hijack the idea of America”.