HONG KONG - Real estate tycoon Joseph Lau and his girlfriend, former entertainment reporter Kimbie Chan, have filed a notice of intended marriage, the latest twist in the tabloid saga of their love triangle.

Mr Lau is Hong Kong's fifth richest man, with a net worth of US$12.6 billion (S$18 billion), according to Forbes magazine. He made headline news last year when he paid a record US$49 million at auction for a blue diamond for Josephine, his daughter with Ms Chan who is now eight. He has five other children with Ms Chan, Ms Lui and his late former wife Theresa Po.

In his breakup statement published on Nov 15, he said he had given Ms Lui HK$2 billion (S$368 million) in cash, jewellery and other gifts during their relationship, leaving her a "super rich woman" who did not need his financial support.

In an interview with Apple Daily that day, he denounced her "insatiable" greed and said he would leave Ms Chan billions, so that she could fight off any lawsuit filed by Ms Lui in future. He also confirmed that he had a recent kidney transplant. 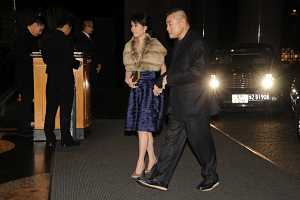 Tycoon Joseph Lau places front-page ads to announce break-up, says he has given ex S$363 million and made her 'super rich'

On Tuesday (Nov 22), he told the newspaper that he had planned to marry Ms Chan a few years ago, and that it had nothing to do with his breakup statement.

Asked why he is marrying Ms Chan out of his girlfriends, he answered: "Kimbie isn't greedy. She's simple. She's not a bad woman. She's taken good care of me and my children. She has a kind heart."

Ms Chan was popular with the stars in her years as an Apple Daily reporter, and comedian Stephen Chow once pinched her face in public, said the newspaper. After meeting Mr Lau through work, she resigned from Apple Daily in 2002 and joined his cosmetics line.

After filing a notice of intended marriage, couples in Hong Kong have three months to make things official. On Tuesday, Ms Chan said of her upcoming marriage to Mr Lau: "This is the happiest thing in life!"