The story: Annie (Toni Collette) and Steve (Gabriel Byrne) are a couple who have to deal with a series of odd events after the death of her mother, a secretive person who Annie believes was mentally ill. Soon, Annie, her son Peter (Alex Wolff) and daughter Charlie (Milly Shapiro) are beset by hallucinations and compulsive behaviours.

This movie is in the vanguard of a new age of high-quality horror, say critics. Since it made a splash at the Sundance Film Festival in January, acclaim for the film has grown. That praise has been matched with better-than-expected box-office returns in the United States.

This reviewer did everything he could to forget the hype before going to a screening, to better judge it on its own terms.

On a couple of points, the critics are spot-on. As many have noted, Collette's performance is hairraisingly good. Annie is the most sharply defined character in this piece, a woman doing everything she can to be a mother to her children in the most trying of circumstances.

The actress is remembered for playing one of the best frazzled mums in film history: Lynn, parent to the boy with special gifts, Cole (Haley Joel Osment), in The Sixth Sense (1999). 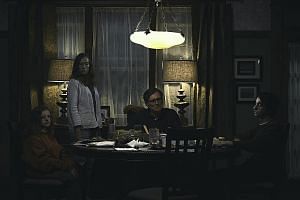 Hereditary's Annie has all of Lynn's maternal anxieties, plus terrors too numerous to count. Collette's mastery of mum moods - she goes from being mildly peeved at her son to having a fully unhinged episode in a flash - gives this otherwise chilly film a powerful emotional centre.

Outside of her contributions, there is much less here than meets the eye. For example, what appears to be a smart examination of grief and its corrosive effect on the mind dissolves into something more manifestly real and also banal.

On the plus side, American writerdirector Ari Aster's feature debut steers clear of cheap jump scares and gotcha fakeouts. Like any proper drama director, he opts for a sustained tone of bleakness, underscored by moderate chills, before everything goes nuclear in the final act.

Every horror work needs a creepy conduit. Recent ones have let a goat, a child's story book and blinking Christmas lights act as the WhatsApp between this world and the other side.

Aster makes Annie a miniaturist artist who makes tiny replicas of the events that haunt her. Her pieces are excellent visual devices, because in the dark corners of that small world, he sneaks in a good number of full-sized chills.