It might have seemed quite sudden considering they have been spotted out together only since mid-June, but the two have actually known each other since 2009. From a backstage encounter at American talk showThe Today Show in 2009, to last weekend's proposal in the Bahamas, here's a look at the Bieber-Baldwin romance.

The exact moment the duo first met was captured backstage at The Today Show, where an embarrassed teenaged Hailey is introduced to the then biggest pop star in the world by her father, actor Stephen Baldwin. She greets him with her arms crossed while her father tells him, "We've been enjoying your music".

Bieber breaks up with singer Selena Gomez, with whom he has had an on-off relationship since 2010. Baldwin gets to know Bieber through the Kardashian/Jenner family as they all go for Hillsong church services together.

Baldwin and Bieber appear together in Instagram pictures, sparking romance rumours. She denies that she is dating Bieber and tells E! News: "We've just been good friends over the years."

Bieber posts a photo on Instagram of the couple sharing a passionate kiss.

They spend Superbowl weekend together. In an interview with GQ magazine, Bieber says that Baldwin is "someone I really love". However Baldwin tells E! News: "We are not an exclusive couple." 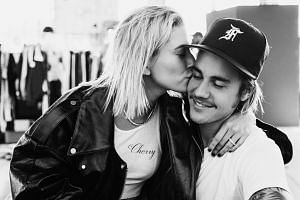 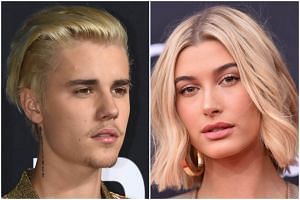 Bieber rekindles his romance with Gomez, after she breaks up with Canadian singer The Weeknd.

Baldwin is rumoured to be dating Canadian singer Shawn Mendes.

Gomez and Bieber call it quits.

Baldwin and Mendes make their red carpet debut as a couple at the Met Gala.

Late May 2018: Baldwin back on the market

Baldwin tells British daily The Times that she and Bieber "went through a long period of time when we weren't friends". She added: "We didn't speak for quite some time and there was a lot of weirdness that went on. We've moved past that."

Baldwin and Bieber are Instagram official again. She deletes all photos of her and Mendes from her Instagram, as she reunites with Bieber in various cities across the United States.

Bieber goes down on bended knee in the Bahamas, and proposes to Baldwin. She says yes to him, and a massive, oval-shaped ring, in front a crowded restaurant where patrons are told to turn their phones off.