The story: David Kim's (John Cho) 16-year-old daughter Margot (Michelle La) has gone missing. Did she run away from home? Was she abducted? As he desperately digs into her online life for clues, he discovers things about her that he didn't know and realises they have drifted apart after the death of his wife from cancer. Rosemary Vick (Debra Messing) is the detective on the case.

On paper, Searching doesn't sound like a very promising proposition. How exciting can it be to view an entire movie unfold on the screens of computers and mobile devices?

But actually, a 2015 episode had already put the "modern" in the sitcom Modern Family by taking place entirely on a character's laptop screen as she switched among video calls, web browsers and social media applications.

Impressive as that was, it was a 22-minute episode. Scaling up the conceit to a full-length feature film is much harder.

Is Searching gimmicky? Yes. But does it work? Absolutely.

In the first place, director and co-writer Aneesh Chaganty's story is solid, with twists and turns nicely paced out to keep one hooked.

He then elevates it with an audacious storytelling style, one that makes perfect sense for the plot. It is worth pointing out that the concept is plausibly sustained throughout. Even a key confrontation that might not be normally caught on tape was reasonably captured on hidden cameras. 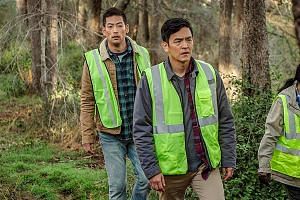 Cho, from the Harold & Kumar comedies (2004, 2008 and 2011), is billed as the first Asian-American actor to headline a mainstream Hollywood thriller. He does a fine job as he goes from being mildly annoyed at his daughter for not taking out the trash to frenzied frustration when she disappears. An uncharacteristically plain-looking Debra Messing from the sitcom Will & Grace (1998 to 2006, 2017 to present) also leaves an impression as a no-nonsense cop.

Impressively, this is Indian-American film-maker Aneesh Chaganty's directorial debut, which won the Alfred P. Sloan Feature Film Prize and NEXT Audience Award at the Sundance Film Festival in January.

As David examines the digital footprint of Margot, he is forced to confront an uncomfortable question: How well do I know my child? It's a question that's more resonant than ever when kids have their own social accounts and one has no idea whom they might be interacting with. The scarier thought is, maybe they don't know either.

In tapping into anxieties about parenting and technology, Searching is very much a movie of our time.