All the public-sale tickets to Coldplay's upcoming concert at National Stadium on April 1 are sold out.

The tickets were snapped up within 90 minutes of going on sale at 10am on Monday (Nov 21). The organiser Live Nation Lushington had previously told The Straits Times that up to 14,000 tickets would be released on Monday.

Sold through Sports Hub Tix, the tickets cost between $78 and $298.

The first two batches of tickets released for the concert - for Citibank customers on Nov 17 and for Live Nation Lushington's mailing list subscribers on Nov 20 - were also snapped up quickly by the fans. It is estimated that up to 40,000 tickets in total have been sold so far. 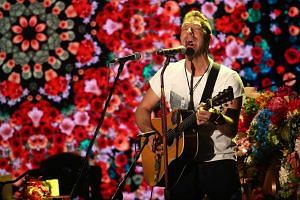 Coldplay concert: 12,000 tickets sold out in one hour, another 28,000 tickets to be released for sale

It's no joke, Coldplay to play their 4th Singapore show at National Stadium on April 1

Live Nation Lushington had also said that they might release an additional 10,000 after finalising the concert's layout.

The scramble has resulted in tickets being re-sold online at inflated prices. In a Facebook post, Live Nation Lushington announced that it has "voided a number of tickets found on the resale market as this contravenes our term and conditions of sale" and urged fans not to buy tickets through unauthorised sellers.

Coldplay, a multi-award winning quartet and one of the world's best-selling bands, played at the Singapore Indoor Stadium in 2001, 2006 and 2009.

The National Stadium, which has a much larger capacity, is set to be their biggest concert here to date.