Actress Naomi Watts, who plays a dysfunctional mum in The Glass Castle, says society has double standards in parenting

In The Glass Castle, Naomi Watts and Woody Harrelson play a mother and father who, by conventional measures, would not win any awards for parenting: They often let their children go hungry and fend for themselves because they are too wrapped up in their own obsessions.

The film, which opens in Singapore tomorrow, is based on American writer Jeannette Walls' memoir of the same name about her impoverished and peripatetic childhood at the hands of Rose Mary and Rex Walls, her highly eccentric and dysfunctional parents.

But Watts suspects some moviegoers will have more objections to Rose Mary's behaviour than Rex's simply because society holds mums to higher standards.

In one scene, a young Jeannette burns herself while cooking because Rose Mary cannot be bothered to feed her. In another, Rex uses the family's grocery money to get drunk. Walls (played as an adult by Brie Larson) ultimately runs away from home to escape this.

Watts - who has two sons, aged eight and 10, with her former partner, actor Liev Schreiber, 49 - acknowledges this was a "horrific" way to bring up a child.

But she believes "a lot of people have trouble understanding the mother role because she does quite a few things that are not the things you would expect of a mother - and people are much harsher in how they perceive her". 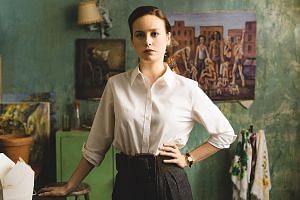 Speaking to The Straits Times at a recent Los Angeles press event, the 48-year-old Australian actress says: "The dad was an alcoholic, taking money from their savings to get whisky, and he gets away with it; whereas Rose Mary is eating chocolate under a blanket and the kids are not eating a proper meal, and yet she's despicable."

The Oscar-nominated star of films such as Mulholland Drive (2001) and The Impossible (2012) believes this double standard "is very unfair". "I guess that's society."

But she echoes the conciliatory tone taken by the film and Walls herself, whose assessment of her parents is ultimately a forgiving one.

After extensive conversations with Walls and her mother, Watts felt "very connected to Rose Mary", she says. "Despite her shortcomings, I thought she was wonderful in the way she kept the family together and lifting one another's spirits despite all those difficult times.

"I commend Rose Mary for all the creativity and optimism she gave her children and the encouragement to always be who you are and tell the truth - those are some really hardcore values to instil in your kids.

"And she was incredibly optimistic. Even when she felt Jeannette represented her in a way she didn't necessarily agree with, she just was, 'Well, that's not how I remember it, but that's her understanding of it.' It was Jeannette's story and she was in full support of that.

"They're survivors and I can relate to that. Not just as a person with a career, but how I was raised, moving countries and losing a father... We weren't dirt poor like them, but certainly, there were financial struggles all along the way," Watts says.

The actress played another atypical woman in a recently released Netflix drama, Gypsy - a psychotherapist who develops an unhealthy fixation with the people her patients confide in her about, then secretly pursues relationships with them.

Complex female characters and female-centric stories such as these have flourished on television in recent years, she notes, explaining that this is why film actors such as herself are moving to the small screen.

"Things are changing and we're witnessing it take place as we speak. And I think TV has become the format that has opened that up.

"Film is in a really difficult place right now, so all the writers who are looking to be employed have moved over to TV and, obviously, we go where the writing and roles are.

"And why shouldn't we invest in these female stories? We're 50 per cent of the population, we have multi-dimensional facets and interesting stories to tell, just like men. So that's what drew me to (Gypsy)."

But is it possible, as some critics have argued, for there to be too many flawed female characters on screen, to the point of cliche, and for there to be not enough aspirational ones to look up to as role models?

"Well, I hope not," Watts says. "Right now, it feels good and I'm looking around me and there are many of my friends who are benefiting from what's going on... and it's very encouraging. I hope it sticks. I do think lots of things are cyclical, but let's hope this one sustains for a while."

A version of this article appeared in the print edition of The Straits Times on September 20, 2017, with the headline 'Bad parents, but mum gets it worse'. Subscribe
Topics:
More
Whatsapp Linkedin FB Messenger Telegram Reddit WeChat Pinterest Print Purchase Article Copy permalink