NEW YORK - That was swift.

"It was an amicable split," a source was quoted as saying.

The Daily Mail said Hiddleston, 35, had been in trouble with Swift, 26, because he asked her to attend the Emmy Awards with him on Sept 18 and she felt uncomfortable with his desire to make the relationship even more public.

The two had not been photographed together in more than a month, since a date night in a restaurant in Santa Monica on July 27, said People. 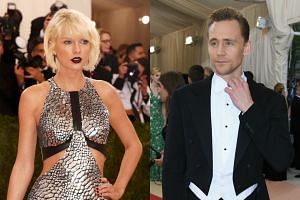 She had moved on to him soon after her split with DJ Calvin Harris was reported on June 1. On June 15, the new romance went wildly public with pictures of the couple kissing on a rocky beach in Rhode Island, where the singer has a summer home.

Afterwards, the stars met each other's parents and were photographed everywhere from Italy to Australia, as observers questioned whether the relationship was a publicity stunt.

Hiddleston said it was not when he spoke to The Hollywood Reporter in July. He added: "Look, the truth is that Taylor Swift and I are together, and we're very happy."