SINGAPORE - Director Tan Pin Pin will withdraw her documentary Singapore GaGa (2005) from a cultural festival in Malaysia after censors requested cuts which she called "arbitrary and nonsensical".

The 55-minute film was to be screened at the Titian Budaya Festival as part of a Singapore film festival from Jan 14 to 17 in Kuala Lumpur.

Titian Budaya is a festival celebrating ties between Singapore and Malaysia, with a showcase of talents from both countries.

Tan wrote on Facebook on Sunday (Jan 3): "Just heard that Singapore GaGa (2005) has been censored by the Malaysian censors as it could be a 'security threat' and 'create doubt and restlessness' among citizens."

The organisers appealed to the chief censor, but the appeal was rejected last week, she said.

She quoted a translation of the censor's report, which was in Malay: "Erase (Victor Khoo) saying 'animals' in Malay and delete the subtitles of 'animals' which has a double meaning. 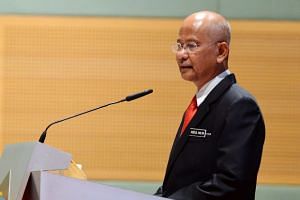 "This goes against the film Censorship guidelines Ministry of home affairs Part II:2.1.1 (v) Dialogue can create doubt and restlessness among citizens and finally may cause a security threat, disturbance of public peace and national defence."

Tan said that this refers to a part of the film where the late ventriloquist Victor Khoo and his puppet Charlee are entertaining children and he teases them by calling them "binatang-binatang" or "animals" in Malay.

Tan concluded: "I have decided to keep the film intact and hence would need to withdraw the film from the event, which I have done."

It was the first made-in-Singapore documentary to get a theatrical release here and has been shown in festivals around the world.