It is the first big superhero movie with a black lead actor, not to mention a mostly black cast - and the significance of that is not lost on stars Chadwick Boseman, Lupita Nyong'o and other key players behind Black Panther, which is now showing in Singapore.

While filming in Atlanta, Georgia last year, its cast and crew took The Straits Times and other press behind the scenes of the movie, which is inspired by the Marvel comics about the fictional kingdom of Wakanda and its leader T'Challa (Boseman) - the titular Black Panther.

They explain it was crucial to imagine this nation as a proud, wealthy and technologically advanced African civilisation - one that has been hiding from the world and masquerading as a Third World country.

This will be hugely aspirational for black and other marginalised moviegoers - especially on Nyong'o's home continent of Africa - used to Hollywoodmaking only films about blacks who are oppressed.

Boseman is weary but upbeat after a long day filming scenes as T'Challa, who made his screen debut in Marvel's Captain America: Civil War (2016), where fans first got a taste of his superhuman strength and reflexes, which are derived from a mysterious metal known as vibranium.

The 41-year-old South Carolina native - who has played other figures in black history, including baseball player Jackie Robinson in 42 (2013) and Supreme Court Justice Thurgood Marshall in Marshall (2017) - knows a major Hollywood film about a powerful African king is the kind of representation blacks have long yearned for.

And for once, he says, he does not have to fret about how his character will reflect on people of colour.

"With this, it's different because it's already set in place for the (positive) images you want to exist. The luxury is not having to worry: 'Is this going to look bad on black people?'"

Boseman is also keenly aware that films with black protagonists are not typically given a US$200-million (S$264.3-million) budget or this sort of global marketing push. Nor are they entrusted to precocious African-American film-makers such as Ryan Coogler, the 31-year-old behind the acclaimed police-shooting drama Fruitvale Station (2013) and the hit Rocky sequel Creed (2015).

"Once in a while, I will think about what it means to be doing a movie of this stature with black people in it, and with this much special effects and technology, with this much money behind it.

"It's a big deal to see Angela Bassett, Forest Whitaker, Lupita, Danai (Gurira), myself and Michael B. Jordan here, and think about how the audience is going to perceive that. I don't have to see the movie to know what that means," Boseman says.

Nyong'o - the Oscar-winning star of the period drama 12 Years A Slave (2013) - plays Nakia, T'Challa's ex-lover and a special ops member.

The 34-year-old Kenyan performer says this is "a very aspirational film for people of African descent".

"For me as an African being in this film, when I walk onto those sets and see those costumes and characters, it's kind of like what the continent could have been had colonialism not happened - which is really cool.

"Because we've borrowed and stolen from African cultures that you will recognise, and they've pressed the accelerator into the future of what those peoples could look like and be like, if we weren't all getting so Westernised."

It is no accident that Wakanda is a rather progressive nation when it comes to its social fabric as women occupy prominent positions here as warriors, scientists and political advisers.

Nyong'o says: "Women play dynamic roles here. For one, the Dora Milaje are the king's bodyguards, his right-hand women - which is a very powerful image to behold." 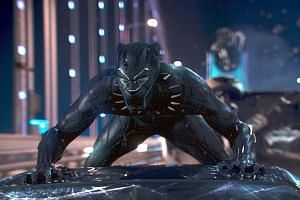 Black Panther: Paving the way for an iconic black superhero 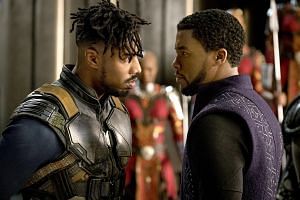 Coogler co-wrote the film and based it on the Black Panther comic-book character created in the 1960s, but the story is a mostly original one.

To bring it to life, an extraordinary amount of Afro-centric research went into everything from the production to costume design to the fight choreography, drawing on the continent's different cultures and traditions.

Boseman says: "There's been a lot of research into language, ritual, songs and African dance. A lot of thought went into the fight choreography, which incorporates fighting styles like capoeira - a Brazilian martial art that is connected to the African art form called Angola - and also Dambe boxing (from West Africa), Senegalese wrestling, Zulu stick-fighting and mixtures of Asian styles like muay thai and harimau silat, to create the fictional heritage of Wakanda."

For Marvel fans and critics alike, the film has been hailed as a corrective to its overwhelmingly white male superhero line-up on screen, and Nate Moore, a producer for the studio, acknowledges that it is "a hugely important movie for us and something we've been planning for a lot of years".

"We want to make sure that the Black Panther movie is something that stands alone. He's a character with a huge history and that includes a lot of great stories and secondary characters and villains, and this movie makes the best of all of that."

But Moore - who two years ago was the only African-American producer in the film division of the studio - says the story does not directly reference the issue of race.

The 39-year-old says: "It's not necessary for us to add an extra layer of theme that is specifically about race because the character exists and that's enough. We wanted it to work as a piece of entertainment that people enjoyed, regardless of the politics."

Still, he adds: "You're obviously conscious of it - you can't not be. And we think it's really special because of it."

• Black Panther is showing in cinemas.