When Taiwanese breakout star Vivian Sung gets approached on the street for photographs, she ends up asking her fans whether they mind that she is not glammed up. This is because the obliging actress from last year's hit romantic comedy Our Times feels apologetic for not being photo-ready.

The 23-year-old said: "When I'm not working, most of the time I'm bare-faced or have very light make- up on. That's why I feel embarrassed when fans on the street ask for a photo. I will ask them if they mind, I'm glad to take the photo if they don't."

She was speaking to The Straits Times to promote her new Taiwanese idol drama Taste Of Love, which premieres in Singapore on Jia Le Channel on July 11.

During the session, it was apparent that the unassuming air of the bumbling nerd Truly Lin she played in Our Times was no act. 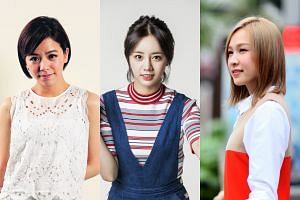 From time to time, she playfully exchanged jibes with her co-star Ray Chang.

Though she achieved stardom fresh out of school, fame has not gone to her head. Last year, she graduated from the Textiles and Clothing faculty at Fu Jen Catholic University in Taiwan.

The school belle was already a household name in Taiwan because of her debut movie Cafe. Waiting. Love (2014). But it was mega-hit Our Times which rocketed her to fame in the region.

The high-school romance is the highest-grossing Taiwanese movie in Singapore, with more than $3.5 million earned at the box office last year. Her performance also garnered her a Best Actress nomination at last year's Golden Horse Awards.

Taiwanese government officials are capitalising on her popularity. The film was a hit in South Korea and Apple Daily reported that the actress has been appointed a tourism ambassador to attract Korean visitors to Taipei.

Judging from her acting resume, it is safe to say her appeal lies in her wide-eyed innocence. So far, she has been cast as the girl-next-door type in her three projects.

Both Lee Si-ying of Cafe. Waiting. Love and Truly Lin of Our Times were students pining for love. In Taste Of Love, she is bubbly tour guide Yeh Hsiao-ho, who loves to help people and hunt down good food.

Some might find the wholesome image limiting, but the level-headed actress sees it from a different perspective.

She said: "There are 100 types of girl-next-door. So far, I've portrayed only three types. Someone once asked me if I'm worried about being stereotyped as a student. To me, I'm treasuring the fact that I can still wear a uniform and look convincing as a student."

In her latest project, she puts on a uniform again as she returns to a school setting in the Chinese fantasy romance Proud Of Love. She is reportedly in Beijing filming the Web drama, which will be available on major Chinese video-streaming site Youku Tudou in September.

While there are plenty of overseas opportunities beckoning, ultimately, home is where her heart is.

Lamenting the lack of family time due to her long filming hours, she said: "During my school days, I used to think it was boring to return home after school. Now when I'm tired at work or overseas filming, I miss home. After entering the workforce, I now know why people say that home is a safe harbour."

She said: "My parents are really supportive. My mother makes it a point to keep newspaper articles about me."

Die-hard male fans will be disappointed to learn that she has another pillar of support - her long- time high-school sweetheart.

Coy about revealing too much, she would only say: "Sometimes my boyfriend visits me on the film set. That small gesture is a source of strength for me."