TAIPEI - Angelababy's natural beauty is in question again, after a Taiwanese plastic surgeon raised doubts about the appearance of the actress' nose in X-rays and CT scans.

Days after she was found by Chinese cosmetic surgeon Qi Zuoliang not to have undergone plastic surgery, Taiwanese doctor Hsieh Tung-ying revived the debate on Facebook by analysing the images, said China Times today.

He shared a photo of a scan, saying she "seems to have an extra wand-like thing at the back of the nose", the report said. But he also wondered about the provenance of the scans. Had her studio really shared her scans, and not someone else's, with the media?

Later, he edited his posts to say: "I don't have any conclusions." He said he saw "some structural confusions in the nasal anatomy", but could make no diagnosis based on low-resolution images. 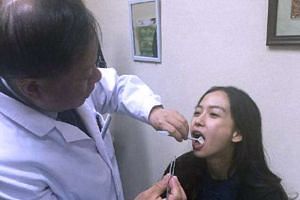 Angelababy underwent a medical examination in the presence of her lawyer, notaries and reporters last Thursday, on the recommendation of a court. It was for a defamation complaint she filed against a plastic surgery clinic that said she had a bad chin job.

On Monday, Dr Qi said he had not certified Angelababy a natural beauty. He said he did not have the authority to do so and had checked the patient only at her request.