NEW YORK • She was recovering at home after an organ transplant, but found strength in the glorious world outside to write a book.

Susan Vreeland also drew on her love of art to fashion well-regarded novels about paintings and those who paint or own them.

The cause was complications from heart surgery, her agent said.

Among Vreeland’s best-known books is her second novel, Girl In Hyacinth Blue (1999), about a fictional painting that may be a lost Vermeer.

It traces the painting’s various owners through history, illuminating them, their times and the artwork. She wrote the book while being treated for lymphoma. 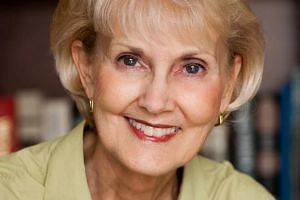 Susan Vreeland, whose books are rooted in her love of art, dies

“I remember the first time, after a bone-marrow transplant and the 100 days of solitude and confinement that followed, the world was glorious,” she told an interviewer.

“Every little blade of grass was sticking up and doing its part to make the world glorious, every breeze was a blessing.

“So anything in the book that is an intense description of landscape, that shows tenderness, it is because of the tenderness towards the world that I was feeling myself.”

Vreeland was born on Jan 20, 1946, in Racine, Wisconsin. Her father was a manager in the aerospace industry while her mother had a long-standing interest in art.

Vreeland lived much of her life in San Diego, where she taught in high school for many years, retiring in 2002.

Her first book, What Love Sees, came out in 1988 but it was Girl In Hyacinth Blue that brought her wide attention.

“Intelligent, searching and unusual, the novel is filled with luminous moments,” Katy Emck said in reviewing the book in The New York Times.

In 2003, the book was turned into a made-for-television movie, Brush With Fate, starring Ellen Burstyn and Glenn Close.

Vreeland’s husband, Joseph Gray, whom she married in 1988, recalled how a particular scene in that book came about.

He had already gone to bed one night when Vreeland, working late, nudged him with a question.

“She asked me, ‘How can I get a baby and a painting into a small rowboat during a flood?’”

“My reply was that was crazy, to endanger a baby in a small, unsteady boat, as well as a painting, and for what purpose?

“Readers would not believe it – it would never fly. Her reply: ‘It does not have to fly, just float.’”

Vreeland continued to write novels grounded in art, among them The Passion Of Artemisia (2002), which drew on the life of Italian painter Artemisia Gentileschi; Luncheon Of The Boating Party (2007), inspired by the Renoir painting; and Lisette’s List (2014), about a young woman with a love of artworks.

She once explained her own love of art and handicrafts this way: “That a thing made by hand, the work and thought of a single craftsman, can endure much longer than its maker, through centuries in fact, can survive natural catastrophe, neglect, and even mistreatment, has always filled me with wonder.”

Ms Susan McBeth, who runs Adventures By The Book in San Diego that arranges tours led by authors, said she was always struck by Vreeland’s energy and enthusiasm. On a tour to France, the stops included the Rodin Museum in Paris, and Vreeland came up with the idea of having each couple on the tour strike the pose of the sculpture The Kiss.

“She pulled aside each husband on the tour, and then helped place the respective spouse on his lap, and then posed their heads and hands,” Ms McBeth recalled. “Each couple on the tour posed that way, and pretty soon, a long line of tourists (whom we had never met) started lining up.”

They included a newlywed couple from Brazil. “They looked into each other’s eyes like only newlyweds can do,” Ms McBeth said, “and then I snapped a photo just as Suzi sat next to the bride with her head on the bride’s shoulder, holding up a photo of The Kiss.”