CHICAGO (WASHINGTON POST) - Chicago police are asking the public for help in locating two "people of interest" caught on surveillance footage just before the alleged assault against Jussie Smollett, a black, openly gay actor best known for his work in Fox's Empire.

Police released images showing two figures, both wearing what appear to be dark jackets, walking along a snowy street between 1.30am and 1.45am local time on Tuesday, nearby where Smollett, 35, alleged he was attacked less than an hour later.

Smollett reported that he was assaulted by two people carrying a noose and an unidentified "chemical substance" in what police are calling a "possible racially charged assault and battery."

"While video does not capture an encounter, detectives are taking this development seriously & wish to question individuals as more cameras are being reviewed," Chicago police spokesman Anthony Guglielmi tweeted on Wednesday (Jan 30).

Smollett was walking in the 300 block of East North Lower Water Street about 2am local time on Tuesday "when two unknown offenders approached him and gained his attention by yelling out racial and homophobic slurs towards him," the Chicago Police Department said in a statement to The Washington Post.

"The offenders began to batter the victim with their hands about the face and poured an unknown chemical substance on the victim."

Police could not confirm the gender of the offenders or identify the chemical substance.

"At some point during the incident, one of the offenders wrapped a rope around the victims neck," the statement said.

Eventually the offenders fled, and Smollett transported himself to Northwestern Hospital "and is in good condition."

"Given the severity of the allegations, we are taking this investigation very seriously and treating it as a possible hate crime," police said.

Smollett told detectives his attackers said "something to the effect of 'this is MAGA country'," an apparent reference to President Trump's enduring "Make America Great Again" campaign slogan, during the assault.

Police spokesman Anthony Guglielmi said the initial police report did not reference those comments, but the actor recalled the information in a follow-up interview with detectives.

Guglielmi said Smollett still had a thin, white rope around his neck when officers first made contact with him around 2.40am, roughly 40 minutes after the alleged assault. He also confirmed that the FBI is investigating a threatening letter that was sent to Smollett on Jan 22 at the Fox studio in Chicago.

Fox released a statement on Tuesday in support of the actor.

"We are deeply saddened and outraged to learn that a member of our EMPIRE family, Jussie Smollett, was viciously attacked last night. We send our love to Jussie, who is resilient and strong, and we will work with law enforcement to bring these perpetrators to justice. The entire studio, network and production stands united in the face of any despicable act of violence and hate - and especially against one of our own."

Smollett's publicist did not immediately respond to The Post's request for comment.

Smollett began his career as a child actor with his siblings, who include actress Jurnee Smollett-Bell. He is best known for playing Jamal Lyon on Empire. The character is a gay R&B musician who has faced homophobic criticism from his mogul father. 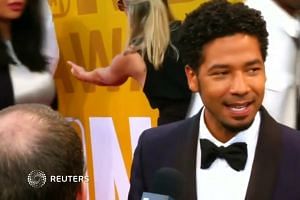 The character struggled with his sexuality before coming out in a buzzed-about Season 1 episode. The plot development led to widespread speculation about Smollett's sexuality.

A month later, Smollett appeared on the TV show Ellen, when he confirmed he is gay.

"It was really important to me to make sure that it got across that there is no closet, there's never been a closet that I've been in," he told TV host Ellen DeGeneres. "I don't have a closet. But I have a home and that is my responsibility to protect that home. So that's why I choose not to talk about my personal life. But there is, without a doubt, no closet I've ever been in. And I just wanted to make that clear."

He more directly addressed his sexuality in a 2016 interview with Out magazine. Though Smollett said he was open to falling in love with anyone, he identifies as a gay man.

As news of his attack spread Tuesday, Smollett received statements of support from LGBTQ advocacy organisations he has worked with over the years.

"Jussie is a true champion for LGBTQ people and is beloved by the community and allies around the world," GLAAD said in a statement.

"This shocking attack on our friend and tremendous advocate Jussie Smollett is, unfortunately, not an isolated incident," said Chad Griffin, president of the Human Rights Campaign.

"There is an alarming epidemic of hate violence in our country that disproportionately targets Black people, LGBTQ people, and religious minorities - and particularly those living at the intersections of multiple identities."

Last year, the FBI said there was a 17 per cent increase in hate crimes in 2017 - the third consecutive year such crimes increased. Of the 7,175 hate crimes reported by United States law enforcement agencies, 2,013 incidents targeted black Americans. 1,130 hate crimes involved people who were targeted based on their sexual orientation.

Messages of support from fans and fellow celebrities for Smollett poured out on Twitter as the news unfolded.

We resolve to keep doing what we do – telling stories that create a kinder world, and it is our solemn prayer that Jussie has a speedy recovery and that his attackers are brought to justice.

An attack on my friend and colleague @JussieSmollett is an attack on everything that is great about America. Keep your head up Jussie. We stand with you. Love will always conquer hate. @EmpireWriters @leedanielsent @EmpireFOX

Terrence Howard, the star of Empire, appeared on Good Morning America on Wednesday morning, where he said Smollett was improving, though it was difficult.

"I heard he's getting better. You know, he's angry," Howard said. "But I know Jussie. Jussie's anger will dissipate and he will forgive these people for what they did. But he won't, and we cannot, forget their actions. They have to be forgiven because it was done out of ignorance."

Empire co-star Vivica A. Fox tweeted in all caps: "IM SO ANGRY AND HURT ABOUT THIS! THIS MUST STOP!! SPREAD LOVE NOT HATE! PRAYERS UP TO U NEPHEW!"

Lee Daniels, who co-created Empire with Danny Strong, posted a heartfelt and expletive-laden video on Instagram.

Strong, meanwhile, wrote that he is "deeply horrified and saddened by the racist and homophobic attacks."

Smollett "is a kind and profoundly talented soul whom I respect with all my heart. The terror of racism and homophobia has no place in our society, it is the most indecent way to live," Strong tweeted.

"Whoever did this, do not forget that you are nothing but hate filled cowards while Jussie's talent and activism will continue to shine a bright light on to the world for decades to come."

...whoever did this, do not forget that you are nothing but hate filled cowards while Jussie’s talent and activism will continue to shine a bright light on to the world for decades to come.

"We ALL have a responsibility to rise up against the ignorance and hate out there. If you know who did this... REPORT THEM TO THE POLICE," tweeted Scandal creator Shonda Rhimes.

Grey's Anatomy actress Caterina Scorsone sent "love and healing" to the actor: "We must tirelessly teach our children about the dignity and sacredness of each and every human being so that this kind of insanity ends. Hate destroys us from within. Teach them to love. It's on us."

Democratic Senators Kamala Harris and Cory Booker both weighed in on Twitter, calling the assault a "modern-day lynching".

"No one should have to fear for their life because of their sexuality or color of their skin," tweeted Harris.

"We must confront this hate."