Here is a look at what some of them - as well as the race drivers themselves - got up to while in Singapore.

OneRepublic on Friday (Sept 15) night tweeted a photo of lead singer Ryan Tedder, 38, saying the band was “hunting for the cheapest Michelin Star restaurant in the world for some chicken rice”.

“It was amazing,” he wrote. “We love it here, thus we keep coming back.”

2. Ariana Grande dances with the Supertrees

A video posted on YouTube on Thursday by Bandwagon TV shows pop starlet Grande singing and dancing at Gardens By The Bay, seemingly enthralled by the dazzling Supertrees.

She added heart emojis to a shot of the trees lit up in pink and purple lights. She watched the light show 46 times, she wrote.

The group also posted a photo of a page from The Straits Times Life, headlined: “The biggest names at the F1 stage this year”.

“Get Ready, Singapore,” it wrote. 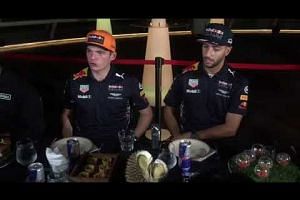 Formula One: Durian, the king of fruits proves to be Max Verstappen and Daniel Ricciardo's kryptonite

Ricciardo, 28, said the texture was weird and reminded him of “big foot’s d***.”

Swedish Formula One driver Marcus Ericsson of Sauber Ferrari cooled down in an ice bath after a running session.

The Sauber F1 team tweeted a photo of the 27-year-old in a white bath tub filled with ice.

Verstappen also found it hot, sharing a photo on Instagram of himself against a backdrop of the Singapore Flyer, writing: “High temperatures around here! I’m ready for the #SingaporeGP challenge. #keeppushing #unleashthelion”.